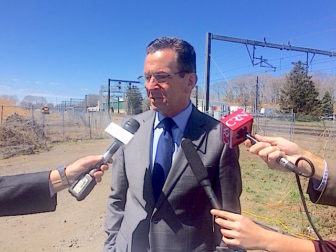 Old Saybrook – Gov. Dannel P. Malloy did nothing Thursday to mollify legislative Democrats who openly defied him over the past week by largely rejecting his deep budget cuts in favor of higher taxes on the wealthy, businesses and hospitals.

In his first remarks to reporters since the legislature’s Finance, Revenue and Bonding Committee passed a tax plan Wednesday raising $1.8 billion in new revenue over the next biennium, the governor said legislators of both parties were ducking hard decisions.

“I’m willing to discuss everything, but I’ve been standing by for eight weeks while everybody, Republicans and Democrats, pretended we didn’t need to make hard decisions,” Malloy said, referring to the budget he proposed eight weeks ago.

He dodged a question about whether he would veto any tax increases beyond those in his proposal, but he dismissed the spending plans of the Democratic majority and Republican minority as exercises in blowing off steam and political posturing.

“I mean ultimately, everybody needed to, I guess, beat their chests, put out their ideas, make their political points,” Malloy said. “At some point, we’ve got to get serious about getting a budget. Neither of these budgets are the budgets that we’ll end up with.”

Democratic legislators reacted with a mix of puzzlement and annoyance late Wednesday when the administration portrayed their finance package as a burden on the middle-class, a line of attack that seemed calculated to drive a wedge between legislators and their political base.

Why was a Democratic governor casting the Democratic finance package as “overly burdensome” on the middle class, when it would raise the income tax and impose a capital gains surcharge on the wealthy, single filers who earn $500,000 and couples earning $1 million?

Malloy, ignoring property tax relief that would be extended by the package, focused on how the Democrats would greatly expand the list of products and services subject to a sales tax whose rate would fall from 6.35 percent to 5.85 percent in October and to 5.35 percent in July 2016.

He also noted that some business services would become taxable, increasing taxes on manufacturers and other employers.

Malloy, who spoke to reporters about the budget for less than six minutes after an event on transit-oriented development, arrived with several talking points he repeated in the brief press availability: Spending must be constrained, the GOP is ducking hard choices, and Democrats would hit the middle class.

The governor first dismissed a GOP alternative that claimed that Malloy’s spending cuts could be restored without new taxes.

His analysis was dismissive of how his spending cuts would hurt the poor, the disabled and the elderly or the possibility that Democratic legislators were making a legitimate public policy choice by opting for higher taxes over service reductions.

“It’s not the way to get the job done,” Malloy said. “You’ve got to make hard choices. That’s what leadership is.”

The only attempt at diplomacy, knowing negotiations now must begin, was to avoid delivering the ultimatum of a veto threat. He said, “I don’t need to throw gasoline on the fire.”