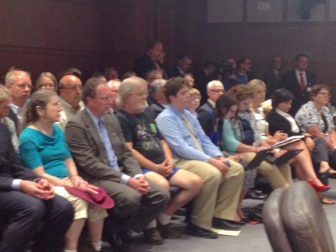 The opposing sides in the state tax debate each tried to grab center stage Monday as Gov. Dannel P. Malloy and Democratic legislative leaders kicked off what many expect to be their most difficult round of budget negotiations yet.

And at the same time, a coalition of state employee unions and social service advocates argued that those tax increases are the fairest way proposed yet to protect vital services for the poor and disabled — and avert the third round of employee concessions since 2009.

“I think of this as a defining moment,” said Connecticut Business and Industry Association President Joseph F. Brennan, who warned that “these tax increases are just going to cascade throughout our economy.”

At issue are tax hikes worth more than $2.4 billion in total over the next two fiscal years  They were recommended last month by the legislature’s Finance, Revenue and Bonding Committee, which is responsible for tax legislation.

Among the changes the committee recommended are:

Lisa Davenport, an interior designer from Durham, said her business works in cooperation with architects, engineers, building inspectors and marketers — all of whose services would be subject to sales tax under the committee plan. “This will certainly cause the clientele to hesitate in retaining our services,” she said.

Goldman said most families’ bonds with their pets are so strong that “animal care is a necessity,” the tax would be an increase on roughly 60 percent of all Connecticut households. “People will finance whatever they have to, to help their animals.”

The finance committee plan also would lower the overall sales tax rate from 6.35 percent to 5.85 percent in July 2016. But Brennan said that, given the state’s recent track record of failing to sunset tax hikes when promised, “there is no confidence that this rate reductions is ever going to be seen.”

Pelletier said a recent review of his files showed 15 percent of his clients — most of which are small businesses — have either investigated or at least discussed leaving the state. “When we talk about these taxes and burdens,” he added, “they do have a real impact.”

Republican legislators offered an alternative budget last month that avoids most of the deep cuts to social services proposed by Malloy and the tax hikes sought by the finance committee.

But the Republican solution to balancing the next state budget hinges on securing more than $630 million in labor concessions while also tightening employee overtime over the next two years.

Better Choices for Connecticut, a coalition of labor unions and social service advocacy groups, held a press conference just before the GOP forum to defend the finance committee plan.

The state budget demonstrates each year what Connecticut values most dearly, including how it cares for the poor and disabled, said Jane McNichol, executive director the Legal Assistance Resource Center of Connecticut.

“We either affirm these values,” she said, “or we chip away at them.”

Velma William-Estes of Meriden, whose child is developmentally disabled, warned legislators that social services advocates won’t go away and won’t allow tax opposition arguments to dominate the debate in the final weeks of the legislative session. 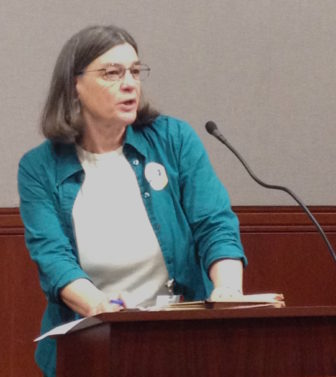 On at least one occasion Monday, the competing interests crossed paths.

Tom Swan, executive director of the Connecticut Citizen Action Group and a strong advocate of a more progressive income tax, waded deep into the anti-tax crowd.

Testifying at the GOP forum, Swan refused repeated challenges from Rep. Terrie Wood, R-Darien, to brand the finance panel’s plan as unfair, since several major components had never been presented at a committee hearing.

Swan also suggested that some of the sales tax hikes that small businesses are concerned about could be avoided by taxing income on the wealthiest households at even higher rates than the finance committee recommended.

“I’m sure that some of Senator Frantz’s neighbors wouldn’t even notice it in terms of their petty cash accounts,” Swan offered as a parting jab at Sen. L. Scott Frantz, a Republican from the affluent community of Greenwich. As ranking GOP senator on the finance committee, Frantz was co-chairing Monday’s forum.

“Have a nice day,” Swan added.

Rep. Mary Mushinksy of Wallingford, the lone Democrat to attend most of Monday’s GOP forum, said the primary reason was “to listen.”

Mushinky co-chairs the Program Review and Investigations Committee, which has been updating past studies into making state services more cost efficient.

But Mushinsky said that, while Republicans are correct when they assert Connecticut could do more to reduce spending, “they are skirting the big issue” in opposing the finance committee tax plan.

That plan dedicates more than $1 billion to mitigate property taxes, which has been recognized in numerous polls and studies as the most regressive and the most onerous tax on Connecticut businesses, she said.

The fate of proposed tax hikes and social services cuts — along with that of the rest of the next state budget — now hinges on negotiations between the Malloy administration and the legislature’s Democratic majority.

The governor, who proposed a smaller revenue package than the finance panel did — about $360 million in new taxes over two years and another $480 million raised by canceling or delaying previously approved tax cuts — has insisted the committee’s tax plan is too much.

Malloy again asserted Monday that, “We believe hard decisions have to be made,” but he was careful not to draw any political lines in the sand.

“I don’t need to threaten to veto things,” he said. “That sometimes can be viewed (as) a little incendiary.”

The top Democrats in the legislature offered an upbeat assessment after their meeting with Malloy, but declined to discuss other details.

“I think it’s very positive,” House Speaker J. Brendan Sharkey of Hamden said of the tone set for final budget talks. “I think we’re all intent on getting a budget done by the end of session and on figuring out what we need to do to get there.”

“We had a very cordial discussion with the governor,” said Senate President Pro Tem Martin M. Looney of New Haven. “All of our aims are moving in the same direction, and we’re looking to pick up the pace to get things done in the next three weeks.”