John G. Rowland and his wife, Patty, during his trial last year.

The multi-million-dollar settlement of damages arising from former Gov. John G. Rowland’s illegal layoffs of unionized state employees will be ratified without a public hearing or, most likely, a debate by either chamber of the General Assembly.

The committee vote is likely to be the only formal action on a settlement that will cost the state about $44 million in cash over four years, plus a significant non-cash award of days off. The total value of the settlement is estimated at about $100 million.

Settlements automatically become final within 30 days of submission to the General Assembly unless the legislature votes to reject them. The settlement was submitted May 1.

In a unanimous decision in May 2013, the U.S. Court of Appeals for the 2nd Circuit concluded that Rowland violated the union members’ civil rights and directed a trial court to begin calculating damages.

On Monday, most of the Republicans on the Judiciary Committee voted against House and Senate resolutions accepting the deal. The House resolution passed 17 to 13; the Senate version, 8 to 2. All those opposed were Republicans.

“I think they should have appealed the case,” said Rep. Arthur O’Neill, R-Southbury.

The state’s avenue for appeal was to the U.S. Supreme Court, but the high court already had refused a separate petition by Rowland to review the 2nd Circuit decision.

O’Neill and Sen. Toni Boucher, R-Wilton, said they were concerned that the settlement could tie the hands of future governors who want to use the threat of layoffs in future negotiations. Jepsen’s office says that concern is unfounded.

The 2nd Circuit noted in its decision that even SEBAC, the State Employees Bargaining Agent Coalition, acknowledged that layoffs are a permissible bargaining tool under the right circumstances.

“Plaintiffs concede that defendants have the right to manage the size of the State’s work force, and may lay off employees based on constitutionally neutral determinations of work force needs and budgetary constraints,” the court said. “But plaintiffs argue that defendants cannot ‘single out members of a constitutionally protected group for termination unless defendants can establish a compelling interest for doing so, and that they utilized the least restrictive means to accomplish those ends,’ which they argue defendants have not done.” 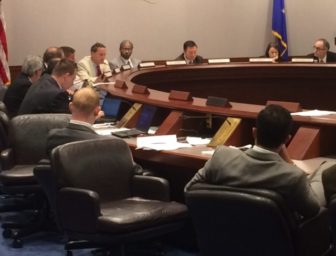 Sen. Paul Doyle, in light coat, explains his vote for the settlement.

Rowland laid off only union members, including some whose salaries were paid by assessments on regulated industries.

Without a settlement, the state faced the prospect of a federal trial judge awarding damages of between $250 million and $340 million, payable within 30 days of judgment, as compensation for the illegal layoffs of more than 2,000 employees in early 2003, according to the attorney general’s office.

Several Republicans said they were uncertain how those damages were calculated, but none pressed the committee’s Democratic leadership to hold a public hearing.

“It’s a matter of the chair’s discretion,” said Sen. Eric Coleman, D-Bloomfield, co-chairman of the committee. “I decided that way because I thought the argument in favor of the settlement was so overwhelming.”

Sen. John Kissel, R-Enfield, the ranking Senate Republican on the committee, voted for the settlement, as did two other Republicans: Sen. Art Linares of Westbrook and Rep. Tom O’Dea of New Canaan.

Sen. Paul Doyle, D-Wethersfield, said no one was eager to vote for the settlement, but they cannot undo the mistakes Rowland made in his last major interaction with labor before being forced to resign in 2004 amid a corruption investigation.

“I really don’t see any other option,” Doyle said. “I can’t reverse what happened 12 years ago.”

More recently, Rowland was convicted of obstruction of justice and other charges related to a campaign finance case involving the unsuccessful congressional campaign of Lisa Wilson-Foley. He is supposed to begin a 30-month prison sentence June 16.