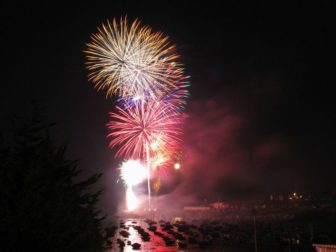 Fireworks over the water

Washington – When the Belle Haven Club wanted to put on fireworks over Long Island Sound near Greenwich last June, the U.S. Coast Guard was required to establish a safety perimeter to keep boaters away from the event, an operation that was paid for by U.S. taxpayers.

But Congress may soon require the Belle Haven Club and others who tap the resources of the Coast Guard for private parties and events to pay for those services.

Some “marine events” that are patrolled by the Coast Guard — like the July 4th fireworks many coastal towns hold every year —  are sponsored by state or local governments. But often the Coast Guard is deployed to enforce a safety zone for a private event.

“Because spectator vessels are expected to congregate around the location of the fireworks display, this regulated area is necessary to protect both spectators and participants from the hazards created by unexpected pyrotechnics detonation, and burning debris,” the Coast Guard said in a notice in the Federal Register that established the safety zone for the Belle Haven Club fireworks.

A Coast Guard authorization bill that is expected to be voted on — and probably approved — by the House of Representatives this month would allow the Coast Guard to bill the Belle Haven Club and others for the cost of establishing and patrolling safety zones on rivers, lakes, oceans, bays or other bodies of water.

State and local governments would not have to pay the Coast Guard for costs associated with events they sponsor. But there is no exception for private, non-profit organizations that sponsor events open to the public.

“American taxpayers should not have to pay the bill for ensuring the safety of waterways around private parties,” said Rep. Duncan Hunter, R-Calif., the chairman of the Coast Guard and Maritime Transportation subcommittee that drafted the bill. “This provision will protect taxpayers by making the sponsor of the party pay those costs.”

American taxpayers should not have to pay the bill for ensuring the safety of waterways around private parties
U.S. Rep. Duncan Hunter, R-Calif.,

Neil MacKenzie, general manager of the Belle Haven Club, said last year’s fireworks display was set off to celebrate the club’s 125th anniversary. He said he did not know if the requirement to reimburse the Coast Guard for event-related expenses would put a damper on future celebrations.

“I can’t speculate on whether we will be less likely to hold an event, but can say that when we do an event, we will comply with all relevant safety zone requirements,” he said.

The Connecticut Mirror wrote about the practice of tapping Coast Guard resources for private events last year. Some of those events are as large as the America’s Cup race and others as small as a local boat show — or a bat mitzvah, birthday or wedding.

The Coast Guard unit stationed in New Haven, known as Captain of the Port Long Island Sound, processes nearly 1,000 permits for marine events every year, setting up and enforcing safety perimeters for some of them. No other  Coast Guard sector in the nation has more marine events each year.

In 2013, the Coast Guard in Connecticut set up more about 60 safety zones, more than  40 were for private events.

The annual Harvard-Yale regatta on the Thames River requires Coast Guard involvement, as does the Mason’s Island Yacht Club fireworks in the Noank section of Groton. And there are dozens of yacht club races and other private functions that tax the Coast Guard’s time and resources.

There are also dozens of municipal fireworks displays over the Sound, and other public events that require a safety zone and Coast Guard patrols. But state and local governments would not be required to reimburse the Coast Guard for the expense of patrolling those events.

The U.S. Coast Guard Authorization Act of 2015 would set the Coast Guard and  Federal Maritime Commission funding levels for two years, and includes provisions to help modernize the guard’s aging vessels. The Senate has not begun on its version of the bill.