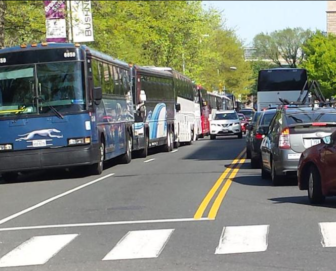 Buses line a street outside the state Capitol where charter school advocates rallied.

The cost to bus charter school students and advocates to rallies: $87,870.

The cost of launching a media blitz including a new wave of television advertisements after state legislators failed to recommend funding new charter schools: $300,429.

The impact on students “trapped in failing schools” if this campaign drives funding to greatly expand charter school enrollment: Priceless, says Families for Excellent Schools, the nonprofit organization behind the effort.

The amount of spending by charter advocates has agitated some state legislators. (Read about that here.)

But the organization says the spending is necessary.

“Often times, it’s the families in cities with struggling schools whose voices are excluded in a public debate. The [organization] has made it a point to elevate those voices,” said Kara Neidhardt, state director for Families for Excellent Schools.