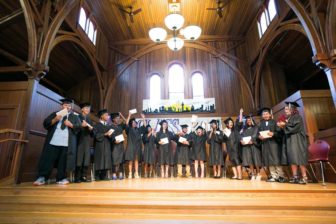 First the bad news: Connecticut has one of the largest gaps in high school graduation rates between students from low-income families and their higher-income peers.

Now the good news: The state is closing that gap faster than any other state, reports Grad Nation, an alliance of numerous organizations, including John Hopkins University’s Everyone Graduates Center.

“Connecticut launched a concerted effort to improve its lowest-performing schools, and from 2011 to 2013 led the nation in reducing the graduation gap between its low-income and middle- and high-income students,” the alliance reported Tuesday.

Just 72 percent of low-income students graduated with their class in 2013, compared to 93 percent of their more affluent peers — a 21 percentage-point gap. Two years earlier, the gap was 27 percentage points.

Despite this progress, the state still has one of the highest graduation gaps; only six states had a larger one in their 2013 class.

The state also has one of the largest graduation gaps between Hispanic students and their peers, but the report shows that Connecticut is also closing that gap faster than nearly every state.

Gaps between those who speak limited English and black students — which are also among the highest in the nation — have also somewhat decreased, the report found.

The number of so-called “dropout factories” — high schools where one in three students don’t graduate — is also declining. There are 13 high schools in Connecticut that have dropout rates that exceeded 33 percent.

“More young people are graduating from high school today than ever before — and gaps in graduation rates are closing — even as standards are rising. The credit for these gains goes to educators, students, parents and community partners,” he said in a statement. “While we should be encouraged by projections like the one in their year’s Grad Nation report, we know that more hard work remains to truly prepare all — not just some — students for success.”

Despite the fact that Connecticut still has some of the nation’s largest gaps in graduation rates and achievement on standardized test scores, Gov. Dannel P. Malloy routinely points to the rising graduation rate as an achievement during his tenure.

“Through smart choices, we’ve already raised the bar dramatically – graduation rates are at record highs, the achievement gap is down, and students are being prepared for the future like never before. Now what we need to do is set the bar higher to deliver a brighter tomorrow,” the Democratic governor said last month when naming his new education commissioner.

Graduation rates in New Haven, Hartford and Bridgeport have all increased by 7 percent over the last three year,s and Waterbury’s rate has remained unchanged, the report found.

Curious if your school has an achievement gap in graduation rates? Find out here.