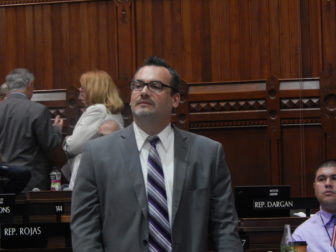 The House of Representatives adopted a measure late Monday that would make it easier for undocumented residents to obtain a restricted, “drive-only” license.

The bill, which passed 107-38 and now heads to the Senate, also was criticized for not addressing concerns about undocumented residents driving without insurance.

“This bill does something to ensure compliance” with state motor vehicle laws, said Rep. Tom O’Dea of New Canaan, ranking House Republican on the Transportation Committee. “Is it perfect? No, but it is much better than it was.”

Rep. Juan Candelaria, D-New Haven, who introduced the measure during Monday’s floor debate, said it is designed to resolve technical problems with a law enacted two years ago.

Lawmakers decided in 2013 to allow undocumented residents to obtain a license that could be used for driving only — and not accepted as proof of identification for purposes such as voting or boarding a plane. But fewer than 1,850 have been issued to date. More importantly, about 45,300 applications for such licenses are pending before the Department of Motor Vehicles, Candelaria said.

The 2013 law allows the DMV to issue a “drive-only” license to applicants who cannot prove legal residence in the U.S. or provide a Social Security number. But they must provide two other forms of proof of identity, such as a foreign passport — either current or expired less than three years ago — a foreign voter registration card, or a marriage certificate.

The new bill would add a birth certificate from a foreign country as an acceptable secondary form of proof of identity.

Critics of the bill argued it only addresses half of the problem legislators tried to solve two years ago.

Rep. Brenda Kupchick, R-Fairfield, who voted against the bill, said legislators two years ago were concerned not only about undocumented residents driving without a license, but also without insurance.

And Candelaria acknowledged the state does not require insurance companies to track which “drive-only” license recipients are covered on policies in Connecticut.

“Maybe we should have added that to the bill,” Kupchick said.

Rep. Melissa Ziobron, R-East Haddam, who voted against the bill, also noted that the “drive-only” license program already is running about $500,000 in the red, and still has a huge backlog of applications to address.

“I would be very careful about ignoring the fiscal costs of extending this program,” she said.