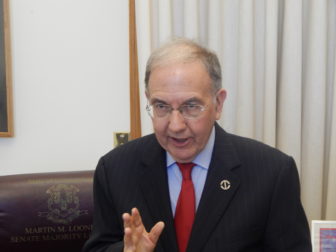 The fate of a major proposed expansion of Connecticut’s sales tax may not hinge solely on the objections of businesses and consumers.

The key question could be whether cities and towns — the prime beneficiaries of these potential sales tax receipts — would use those funds to lower property taxes or to increase local spending.

“We are looking at trying to do something that is transformative,” said Senate President Pro Tem Martin M. Looney, D-New Haven, who said fears about “overly opulent” municipal spending are as unfounded as “knee-jerk reactions” against increasing sales taxes.

Majority Democrats in the Senate, who are spearheading this proposal, already have heard businesses, Republican legislators and Gov. Dannel P. Malloy argue it would weaken Connecticut’s economy.

But the governor isn’t the only Democrat raising concerns. Some rank-and-file members of the House Democratic majority also have expressed fears that their Senate counterparts’ plan — though well intentioned — won’t work as designed.

Former Putnam Mayor Daniel Rovero, now a representative from Killingly, said communities generally have better track records than state government does at being frugal. But he nonetheless questioned whether this would produce the property tax relief Senate Democratic leaders envision.

“I have a problem with the state taxing everybody, redistributing the money the way (top leaders) think is fair, and then thinking we’re going to be able to tell the cities and towns how to spend it,” he said.

And there’s a lot of money at stake — more than $1 billion.

The Senate Democrats’ plan, which was approved by the Finance, Revenue and Bonding Committee, depends largely on applying the sales tax to dozens of new services.

“If you look at the way they are doing this, it burdens the middle class,” Malloy said.

Looney insists it would not.

Applying the sales tax to more services would be offset in part by reducing the overall rate in July 2016 from 6.35 to 5.85 percent.

But the primary relief purportedly rests with more than $700 million in sales tax receipts that would be channeled to cities and towns over the next two years.

A state tax analysis last year demonstrated that property taxes are the most burdensome levy on Connecticut’s lower- and middle-income households, as well as on many small businesses.

Still, critics question, is giving cities and towns another $700 million over the next two years necessarily a good thing?

What if local officials use those funds to expand spending aggressively?

Senate Minority Leader Len Fasano, R-North Haven, said this is his fear. “I don’t want to see that money go into town hall,” he said, adding he’s skeptical any of those funds would be used to lower local property taxes.

Though he opposes the sales tax hikes, Fasano said that – if they can’t be defeated – the decision on how to use those funds should be made at the hyper-local level. Assigning the funds to service districts and neighborhood groups at least would ensure they are spent on the core services residents most need, Fasano said.

But Looney insists the funds would not – and could not – be squandered at the local level , as long as lawmakers enact new spending controls designed to go arm-in-arm with the sales tax increases. These controls, which are still being negotiated, so far include:

Still, the car tax cap, regionalization and PILOT provisions address less than half of the projected sales tax receipts towns would receive. 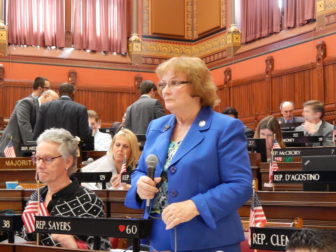 The Senate Democrats’ plan would punish communities — by reducing their share of sales tax receipts — if their budgets grow by more than 2.5 percent.

Looney said this provision ensures all bases are covered. Municipalities get an important new source of revenue, and the residents and businesses that have complained for years of excessive property taxes can expect real relief.

The final version of this bill still was under development last Friday, and many legislators said privately they were unsure — not only whether the cap would control spending sufficiently, but also whether it might be too restrictive.

The chief lobbying agency for cities and towns, the Connecticut Conference of Municipalities, was cautious in a written statement it issued last week.

“The definition of the spending cap is very important,” CCM Policy Director Ron Thomas wrote. “It must be defined with the understanding that there is always potential for unforeseen circumstances that would require municipalities to increase expenditures.”

For example, what if the state imposed costly new mandates on communities, but didn’t adjust the growth cap to reflect them?

Thomas added that CCM understands the intent behind the municipal spending cap as a managerial tool “and that the state seeks assurances that new revenue provided to municipalities would not give license for automatic increases in spending.”