The doctor is online, and lawmakers are prescribing some rules

Dr. Mia Finkelston during a visit using LiveHealth Online, a form of telemedicine that allows the Maryland-based doctor to see patients across the country.

Joanna Leach knew it was time to see a doctor about her lingering cold. But getting to the doctor’s office during business hours was a daunting prospect for the working mom. And she wasn’t eager to wait in an urgent care center or walk-in clinic with a roomful of sick people.

So Leach decided to try something her health plan, Anthem Blue Cross and Blue Shield, had recently added to its benefits package. In the den of her Meriden home, she flipped open her laptop, signed up for a service called LiveHealth Online, and perused a list of Connecticut-licensed doctors. She picked an internist and, in a few minutes, was face-to-face – or screen-to-screen – with her.

Speaking by video, the doctor asked Leach about her symptoms, heard her breathe and cough, and diagnosed a sinus infection and bronchitis. An hour after going online, Leach picked up medication at her pharmacy.

That was Leach’s introduction to telemedicine, a way to receive medical care from a health care provider in another location using a phone, video or other technology. The uses vary widely, from patients videoconferencing with doctors via smartphone to rural emergency rooms using off-site experts to guide care for stroke patients.

Telemedicine — also referred to as telehealth — is expected to become a larger part of medical care as technology evolves, the emphasis on reducing health care costs grows and the demand for care outstrips the supply of medical providers, particularly in primary care.

But regulation of the practice has lagged. Many states in recent years have adopted laws or standards to address telehealth. In Connecticut, where little regulation currently exists for telehealth, lawmakers are considering adopting standards. And that’s brought forward a debate about the exact shape that telemedicine should take.

Proponents of telemedicine — including health insurers, advocates for seniors and some medical groups — say it can reduce barriers to accessing care, make medical services more convenient, cut down on unnecessary emergency room or urgent care visits, save money and help address demand for simple issues that busy physician practices don’t have time to handle.

But the growth of telemedicine — and the ability it provides for patients to be seen by out-of-state doctors with Connecticut licenses — has drawn concern from some physicians, who favor more restrictive regulations. They say there’s reason to worry about fragmentation of care, interfering with the doctor-patient relationship and the potential for patients to abuse the system. They favor more restrictive regulations.

The Senate Tuesday night unanimously passed a bill to establish standards for telehealth, including prohibiting doctors from using it to prescribe controlled substances and requiring that the telehealth provider give records of the interaction to the patient’s primary care provider if the patient gives consent.

Providers offering telehealth services to people in Connecticut would have to be licensed here, but wouldn’t be required to have a physical office in the state. The measure would also require insurance plans to cover telehealth services.

Some supporters of telemedicine, including business and insurance groups, have urged lawmakers to be cautious, warning that restrictions on a still-developing field could hamper its growth.

But Sen. Terry Gerratana, who is co-chair of the Public Health Committee and has taken a lead role on the bill, said it’s time for state law to begin to address the practice.

Sen. Joe Markley, R-Southington, called the bill “admirably modest,” and said during the brief floor debate on the proposal that it would put the state on a path to take advantage of technology that can serve those who need care and save money.

Seeing patients at home or on the road 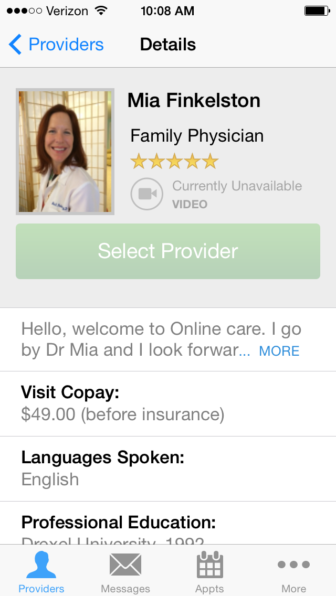 Dr. Mia Finkelston’s profile page on the LifeHealth Online app. Patients can use it to choose a doctor licensed in their state.

Patients in Connecticut who go online searching for a doctor might find Dr. Mia Finkelston, who sees patients across the country from her computer in rural Maryland.

For more than 20 years, Finkelston worked in a “brick and mortar” practice in rural Maryland. But with three kids and a busy practice, life was getting hectic. Her patients often couldn’t get in to see her and sometimes went to the emergency room instead or saw other doctors.

She moved to telemedicine in December 2012, which she does through LiveHealth Online, the company Leach used for her cold.

The cases are less complex than what Finkelston saw in her office — a lot of flu and upper respiratory infections in the winter, rashes and allergies in the summer. On Sunday nights, she gets a lot of pediatric cases from parents wondering if their children are too sick to go to day care. Sometimes she sees patients at home in bed or business travelers in their hotel rooms. She once had a virtual visit from a family on a camping trip with a sick child.

She doesn’t turn many away because they have problems that don’t work with telemedicine; Finkelston said most tend to be younger and healthier, not those with extensive medical histories. But she sends patients elsewhere if diagnosing them would require something she can’t do remotely, like listening to their lungs if pneumonia is a possibility or looking into a child’s ear. She doesn’t prescribe narcotics or medications like muscle relaxants that can be abused.

“Doctors are busy in their offices. They don’t often have time to answer points 8, 9 and 10 on a patient’s list when they come in,” she said.

Proponents say telemedicine is meant to give patients more options, not replace the care doctors provide. 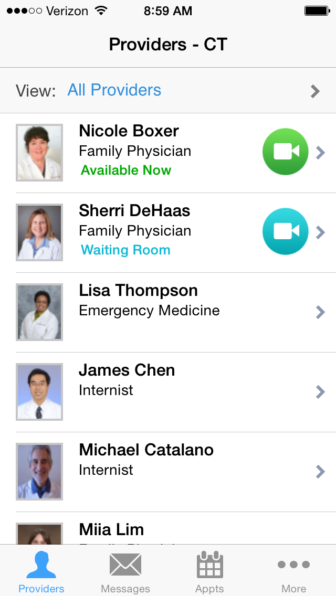 A list of doctors available to Connecticut patients through the LiveHealth Online app. None are based in Connecticut.

“The fundamental principle of going to a physician’s office to see a doctor is great, and we encourage it, and we try not to step on the toes of that if we can help it,” said Dr. Henry DePhillips, chief medical officer for Teladoc, which provides primary care telemedicine in 49 states, including Connecticut. “However, it’s really clear, for a variety of reasons, that there’s a significant mismatch…between the available supply of primary care services and the demand for primary care services.”

“We know that there are very few doctors’ offices across the country that are open to treat patients 24-7. And our goal is to help find ways to care for their patients,” said Dr. Peter Bowers, chief medical director at Anthem, which makes LiveHealth Online available to members for — in many cases — the same cost as an office visit. The company is also working with Connecticut doctors to use the service in their practices, starting with ProHealth Physicians, the largest primary care practice in the state.

Others point to telemedicine as a way to improve access to care for patients who have been disadvantaged. The Connecticut Hospital Association submitted testimony noting that evidence suggests that telehealth can help to address health disparities. The organization said gaps in outpatient care in the state often adversely affect minorities and the poor, and warned that too many restrictions on the use of telehealth could reduce the ability to reach vulnerable groups.

Community Health Center Inc., which has clinics across the state, tested a telemedicine model for Medicaid patients who needed cardiology care. The use of telemedicine saved money, and patient outcomes were similar to or better than those for patients who initially went in person, President and CEO Mark Maselli said in written testimony.

“Telemedicine is moving the delivery model creatively in many states and I worry that Connecticut is lagging because of the limitations currently placed on providers,” he wrote.

But some doctors say more restrictions are warranted.

Dr. Bob Russo, a Fairfield County radiologist and president of the Connecticut State Medical Society, said doctors are looking forward to using telemedicine to follow their own patients.

But he said his organization has concerns about its use between a doctor and patient who have no previous relationship, when the doctor doesn’t know the patient’s history.

He offered an example of a potential problem: a doctor might recommend surgery for a patient with acute diverticulitis. But if the patient would rather not have surgery, he could try telemedicine and omit information about his medical history so the doctor would be more likely to recommend medication instead of surgery, Russo said.

“Those are the sort of things, those kind of incidences, that worry us the most,” he said, adding that it could be difficult to reach a doctor for a followup if complications arise.

Still, Russo said he expects telemedicine to proliferate. “I do believe it’s going to be woven into the fabric of medicine, but I think it will be done correctly,” he said.

In testimony, the medical society and the Connecticut Chapter of the American College of Physicians wrote that telemedicine could allow a significant amount of medical care to be shifted out of the state or the country.

The models for telehealth vary. LiveHealth Online, for example, currently has no doctors based in Connecticut and uses many doctors who practice telemedicine fulltime, while Teladoc uses doctors with brick-and-mortar practices who do telemedicine on the side. Last month, 93 percent of Teladoc’s 268 Connecticut consults were done by Connecticut doctors.

Finkelston said she thinks the gaps between telemedicine advocates and skeptics could be bridged. Ideally, she said, doctors in brick-and-mortar practices could have a relationship with those practicing telemedicine. If a patient with an upper respiratory infection calls for an appointment, and the doctor doesn’t have a slot, he could refer the patient to “my colleague online.”

There are 6,906 coronavirus cases in Connecticut, while 206 people have died and more than 1,200 people are hospitalized.

CT residents on living in the time of coronavirus: ‘We’ll get through this’

A hot dog man/mayor. A psychiatrist. A beekeeper. These are just a few of the voices from the COVID-19 pandemic.

There were palms on Palm Sunday. Just not where you'd expect.

For the third straight day, Fairfield and New Haven counties had the most new coronavirus cases in Connecticut Sunday.