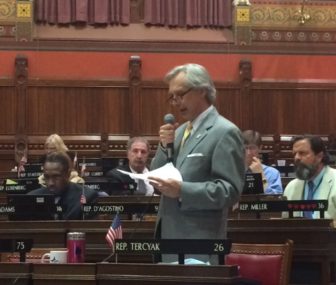 Employers would be barred from disciplining employees who voluntarily share information about their pay under legislation passed early Wednesday by the House and sent to the Senate.

Minutes after midnight, the House of Representatives voted 104 to 40 to pass a bill that divided the GOP minority.

House Minority Leader Themis Klarides, R-Derby, and her four deputy leaders were among 20 Republicans to vote for the bill, while 39 others joined one Democrat, Daniel Rovero of Killingly, in opposition.

The bill was opposed by the Connecticut Business and Industry Association, whose assistant counsel testified that “allowing employees free rein to compare their wages can lead to morale issues within the workplace.”

Rep. Peter Tercyak, D-New Britain, co-chair of the Labor and Public Employees Committee, said the concept of the bill was simple: Secrecy allows employers to hide pay inequities, often at the expense of women.

But Republican rank-and-file questioned the need for the bill and suggested it would interfere with employment contracts.

“I think sometimes we create things just for the sake of creating them,” said Rep. Selim Noujaim, R-Waterbury, who is a manufacturing executive.

Wednesday marks the start of a seven-day march to the adjournment deadline of midnight June 3. House Democrats are expected to meet in caucus to discuss the status of budget negotiations with the Malloy administration.

Earlier, the House voted 135 to 11 to amend and return to the Senate legislation intended to conform state law with a U.S. Supreme Court decision barring life sentences for juveniles as cruel and unusual punishment under the 8th Amendment.

“The Supreme Court emphatically made that judgment that under the 8th Amendment we have to change the way we sentence juveniles,” said Rep. William Tong, D-Stamford, co-chair of the Judiciary Committee.