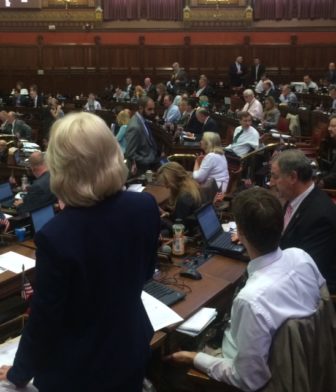 The House of Representatives voted 144 to 1 Wednesday for final passage of legislation banning electric retailers from offering variable-rate contracts to residential customers.

“The state of Connecticut now has gone on record as saying variable rate contracts are predatory and bad and should be banned,” said John Erlingheuser of AARP, which sought the measure.

The sole dissenter in either chamber was Rep. John Piscopo, R-Thomaston, who complained that a consumer protection measure passed last year already gives customers sufficient information to guard against fraud.

The bill would be the second passed in two years to combat third-party electric retailers who attract customers with low teaser rates, then bump them far above the standard-offer rate charged by Eversource or United Illuminating.

The 2014 law already requires a new billing format in July that gives consumers notice of when their electric contracts expire.

“I think we should just let that run,” Piscopo said, saying that the new billing format already has reduced consumer complaints. “We have turned it around.”

But legislators in both parties concluded that the variable-rate contracts, which many third-party retailers do not offer, are solely used to draw in consumers, then subject them to higher rates.

The ban would apply only to residential customers. Many businesses, especially large companies that are major consumers of electricity, have sophisticated staffs that can monitor the variable market.