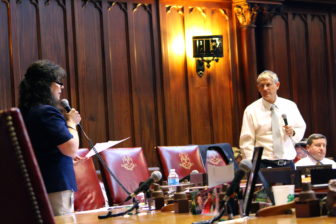 Senators Danté Bartolomeo and Kevin Witkos, the Democratic and Republican leaders of the legislative committee that oversees higher education, both speak in support of in-state tuition for undocumented students.

Connecticut is set to become one of the most generous states in the U.S. when it comes to offering undocumented students in-state college tuition rates.

“What we are tying to do here [is] make the hurdles that are so high a little bit lower,” Senate President Pro Tem Martin M. Looney said before legislators voted to expand who qualifies for lower tuition rates.

Current state law requires an undocumented immigrant to attend all four years of high school in Connecticut to qualify for in-state tuition rates. The bill approved by the Senate in a 19-13 vote requires the state’s public colleges to offer in-state tuition to children that attended a Connecticut high school for two years. It also would allow immigrant children who are victims of labor abuses or sex trafficking to pay in-state tuition. The bill now heads to Gov. Dannel P. Malloy, who proposed the change.

The shift makes Connecticut’s threshold among the lowest in the country, according to the National Conference of State Legislatures, a nonpartisan think tank that tracks state laws.

It also means Sheyla Rivera will be able to finish her college degree.

“This is so amazing,” Rivera said, following the vote with a shriek in excitement. “Oh my God, I am so happy.”

Rivera, who moved to West Hartford from Peru in 2010, managed to pay her way through Capitol Community College and earn her associate’s degree. However, since she attended just two years of high school in Connecticut, she was unsure if she would be able to finish her bachelor’s degree at Central Connecticut State University.

With the Senate approval, she said she plans to enroll in summer courses.

It’s unclear how many students the change will impact.

At the University of Connecticut, 90 students have identified themselves as being undocumented and taken advantage of in-state rates since the threshold was changed in 2011 to attendance at a Connecticut high school for four years. The state’s other public college system — which includes the four regional Connecticut state universities and 12 community colleges — is unsure how many students have benefited from the change. 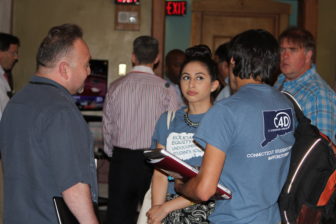 Alison Martinez, center, celebrates the vote with other supporters outside the Senate chamber.

Alison Martinez Carrasco, an undocumented resident who lives in Windsor, is one of the students who benefited from in-state rates. But, she said, too many students still had not been able to go to college because of the four-year requirement.

“This change is going to change the lives of more people,” she said after the vote.

But advocates said the job is not done if lawmakers truly want to level the playing field for undocumented students. A separate bill passed by the Senate and awaiting action in the House would allow them to compete for the $140 million pool of public college financial aid.

With the in-state tuition rate at the state’s public, four-year colleges hovering around $10,000 a year, students say many still need financial aid in order to enroll.

It’s unclear whether the House will approve the financial aid bill before it adjourns next Wednesday at midnight.

“We have to gauge our support,” House Majority Leader Joe Aresimowicz, D-Berlin, said during an interview Friday. “Its just a matter of if we have the votes. and if so we will put it up.”

The governor welcomed Friday’s vote in the Senate.

“The legislation passed today moves Connecticut forward tomorrow. It helps us build a brighter future not just for our children now, but for our economy in the long-term. Most importantly, it’s the right thing to do,” said Devon Puglia, a spokesman for the Democratic governor.

The Senate approved the bill with the support of three Republicans — Sens. Kevin Witkos, Art Linares and Clark Chapin. One Democrat, Sen. Paul Doyle, voted against the bill.

The main argument in opposition to the bill was the need to focus state efforts on helping legal Connecticut residents.

“I have nothing against undocumented immigrants, but I’ve got people that have been here for 50 years” that struggle to pay for college, said Sen. John Kissel, R-Enfield.

Correction: An earlier version of this story had an incorrect number for the approximate cost of in-state tuition at Connecticut public universities.