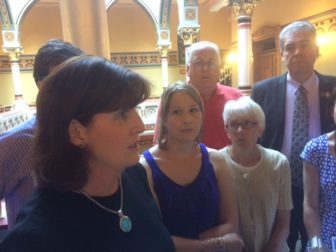 Karen Jarmoc, at left, of the Connecticut Coalition Against Domestic Violence, with the family of Lori Jackson and legislators.

The Connecticut Coalition Against Domestic Violence quickly mobilized Saturday night to press a wavering House leadership to call a vote on legislation intended to allow police to temporarily take firearms away from persons served with temporary restraining orders.

“We are looking for the House to call this bill tonight. They’re here. It’s critical that it happen this evening, because the concern is if it happens Monday, it’s going to be too late,” said Karen Jarmoc, the coalition leader. “That’s why these folks came up here, probably, at an hour’s notice.”

The parents and sister of Lori Jackson, who was shot to death a year ago after seeking a restraining order against her estranged husband, stood with Jarmoc and other advocates of the legislation.

“We did all we could to save her,” said Merry Jackson, her mother, describing the installation of an alarm system and panic buttons after her daughter came home to flee Scott Gellatly, the husband she had come to fear.

Authorities say Gellatly, who had not yet been served with the restraining order, broke into Jackson’s home and shot Lori Jackson to death. Merry Jackson was shot four times in the attack.

Lori’s sister, Kacey Mason, said the legislation is important to the family.

“I think it has the potential to save so many lives,” she said.

Theirs was the most dramatic and public effort on the last weekend of the 2015 session to plead for a vote before the constitutional adjournment of midnight Wednesday.

“We’re running out of time. The concern is that it’s going to fall by the wayside,” said Jarmoc, a former legislator. “It is just too important. This is good policy. It is going to save people s lives.”

The bill would require the subject of a temporary restraining order to surrender all firearms and ammunition for at least 14 days.

“It is my intention to run it before the end of the session,” said House Speaker J. Brendan Sharkey, D-Hamden, but he did not commit to a time. “We have to find the time within our schedule to do it.”

House leaders say the bill will generate a long debate by some Republicans opposed to anything smacking of gun control, possibly consuming most of a session day.

House Minority Leader Themis Klarides, R-Derby, said some members of her caucus object to the seizure of firearms, even temporarily, without a contested hearing. The bill would allow judges to issue ex parte restraining orders.

The bill would not have saved Jackson, because the police never found Gellatly to serve a summons for a hearing on the restraining order his wife requested.

“There are people who are going to do bad things. It’s our job to minimize that as much as possible, but you trample on certain constitutional rights that we believe in, i.e., due process, to fix a problem that unfortunately is not really fixable,” Klarides said. “That’s my problem with it.”

Klarides, a lawyer, said she has volunteered for 20 years to help victims of domestic violence.

“Nobody understands the issue and is more compassionate to the issue than me,” she said. “There’s not anybody who doesn’t believe this is a serious problem.”