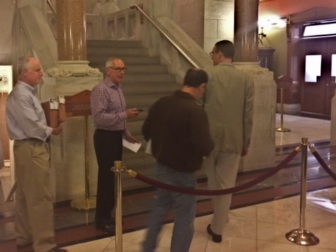 Legislative leaders struck a tax deal with the administration of Gov. Dannel P. Malloy moments before midnight Saturday, setting the stage for action Monday on a biennium budget that would raise taxes on the wealthy and business, while funding property-tax relief and transportation.

The top marginal income tax rate would increase to 6.99 percent on singles earning $500,000 and couples earning $1 million, but a proposed 2 percent surcharge on capital gains was discarded. A legislative plan to extend the sales tax to a wide array of business services was largely shelved, but the tax on data-processing services would triple to three percent.

“We’re accomplishing two major initiatives that will benefit the state of Connecticut for many, many years to come — a major ramp up in transportation that I think everyone agrees we need to do. And again, a major change in how municipalities are able to raise revenue,” said Sen. John Fonfara, D-Hartford, co-chair of the Finance, Revenue and Bonding Committee.

The Connecticut Lottery would be authorized to offer keno, an electronic drawing game in restaurants, bars and some retail outlets.

“We worked cooperatively between ourselves, the House, the Senate and the governor’s office to come up with a tax package this evening that provides property tax relief for working families while also hearing the concerns of our constituents,” said House Speaker J. Brendan Sharkey, D-Hamden. “I think we accomplished a lot, and we’re setting a new course for a more stable and equitable tax system for the state.”

Rep. Jeff Berger, D-Waterbury, the co-chair of the Finance, Revenue and Bonding Committee, said legislators agreed to minimize the expansion of the sales tax to business services, a proposal that had provoked outrage from the Connecticut Business and Industry Association.

But Joseph Brennan, the president of CBIA, said he feared the improvements over the revenue package reported out of the Finance, Revenue and Bonding Committee were not nearly enough.

“Just because it’s not as bad, that doesn’t mean it’s good,” Brennan said.

The tripling of the tax on data processes services would be a blow to the bottom lines of corporations and the business reputation of the state, he said.

“We’re tripling a tax that most other state’s don’t even have,” Brennan said.

Miltary retirees will get a major tax break: the 50 percent income tax exemption on their pensions would double to 100 percent. And cigarette smokers would be spared from their fourth cigarette tax increase in recent years, Berger said.

Fonfara said a cigarette-tax increase was among a long list of revenue sources that were “seriously vetted.”

The governor retreated from his call for price deregulation in the retail liquor business, but the administration prevailed on longer hours for package stores and greater chain ownership.

Package stores could remain open an additional hour every day — to 10 p.m. on weeknights and Saturdays and to 6 p.m. on Sundays. Chains, now restricted to three package-store permits, could own as many as five. Malloy had asked for a limit of six.

Most left without comment. Malloy and the legislative leaders issued a joint statement early Sunday, but they offered no details beyond what Berger and Fonfara confirmed in separate interviews.

“A brighter tomorrow will start with this budget today,” Malloy said in a statement. “This agreement will help Connecticut now and in the long-run — it helps transform our transportation infrastructure as we aim for a best-in-class system. It supports our schools, supports the middle class, and supports vital programs for those who need it most. Most importantly, it helps us build a Connecticut for the long-term, making our state an even greater place to live, work, and raise a family.”

Senate President Pro Tem Martin M. Looney, D-New Haven, had hoped to use a full percentage point of the sale tax for property tax relief, but he still managed to deliver a new revenue source for municipalities.

“After years of acknowledging the need to change our Payment in Lieu of Taxes program, this year, we delivered revolutionary changes by taking into account the relative need for assistance based on the percentage of tax exempt property in each municipality. We also begin to provide substantial relief for car owners and high mill rate municipalities on their car tax,” Looney siad.

The spending plan was largely resolved in recent days, then negotiators turned to resolving a revenue package. Full details on the spending side of the budget were not readily available.

The spending and tax packages will be presented in one bill, which will start in the House on Monday and then go to the Senate.