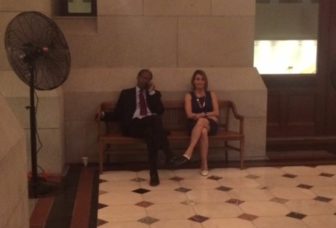 Sen. Eric Coleman, a lead sponsor of the police accountability bill, discusses the measure with House GOP leader Themis Klarides. She refused to back the bill.

The state Senate responded early Tuesday to demands for greater police accountability by unanimously passing legislation that would establish standards for investigating officer-involved shootings and equipping police with body cameras.

With the vocal support of Republican leaders, including a recently retired police officer, the Senate voted for a bill that also requires changes in police training and hiring and subjects departments to liability if police illegally stop a citizen from recording them.

“Police officers have very broad authority, and that includes the use of force, deadly force, in protection of themselves and others,” said Sen. Eric Coleman, D-Bloomfield, offering a simple rationale for a bill that has taken on a sense of urgency in recent months.

The bill goes to the House, where the Republican minority leader, Rep. Themis Klarides of Derby said the GOP has not agreed to let the bill come to a vote before the constitutional adjournment deadline of midnight Wednesday.

The Connecticut State Police would be required to equip its troopers with body cameras, while municipal departments would be encouraged with financial assistance, but not required, to follow suit.

A pool of $13 million in grants would be created for municipalities to purchase cameras and store the images, beginning in the 2017 fiscal year.

The revised bill was co-sponsored by four Republicans in the Senate, including Minority Leader Len Fasano of North Haven and Kevin Witkos of Canton, a retired police officer.

Passage followed high-profile police shootings, including one in which a passerby made a recording of a white officer in North Charleston, S.C., shooting an unarmed black man in the back as he ran away after a traffic stop.

“I think this is a great step forward,” Fasano said. “We don’t need the incident here. Let’s get ahead of it. Let’s be proactive.”

“I am very pleased I know this is a bipartisan effort,” he said.

The bill exempts the body-camera video recordings from release under the Freedom of Information Act under several circumstances, including communication with other officers, encounters with informants, and interactions with victims of domestic or sexual abuse. Recordings depicting victims of homicides, suicides and accidents also are exempt.

The bill encourages departments to recruit minorities and prohibits them from hiring former officers who were fired or disciplined for malfeasance or serious misconduct.

It also requires that police shootings be investigated by a special prosecutor or a prosecutor from a different judicial district than that where the death occurred.

Under current practice, the chief state’s attorney is permitted but not required to have police shootings investigated by a prosecutor from a different judicial district.