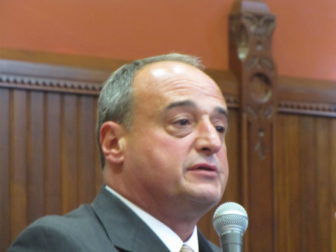 Former House Minority Leader Lawrence F. Cafero Jr., R-Norwalk, is returning to the State Capitol next year as the executive director and general counsel of a major trade association, the Wine & Spirits Wholesalers of Connecticut.

Cafero takes over the job July 1, but the state’s revolving-door statute will keep him from directly lobbying until the 2016 session. The association already is represented in Hartford by the state’s biggest lobbying firm, Gaffney Bennett.

He is a following a path well-trod by other former legislative leaders. Four of the five Democrats who ran the chamber as speaker during Cafero’s 22 years in the legislature are registered lobbyists: Richard J. Balducci, Thomas D. Ritter, James A. Amann and Christopher G. Donovan.

The sale of alcoholic beverages remains a heavily regulated industry in Connecticut, despite an effort again in the recently concluded session by Gov. Dannel P. Malloy to repeal pricing controls.

“For over 50 years, WSWC has represented the wine and spirits distributors of this state with great effectiveness and the highest integrity. It will be my goal to continue in that tradition,” Cafero said in a statement distributed by the trade group.

Cafero, who declined to seek re-election last fall, was unavailable for comment. He announced two years ago he would not challenge Malloy for governor.

He was the House GOP leader for the last eight of his 22 years in the General Assembly.

As a legislator, his personal politics were a mix of social moderation, business boosterism and fiscal conservatism.

Cafero voted to legalize same-sex civil unions and, later, to codify in state law a court decision that legalized gay marriage. He voted for gun-control legislation after the Sandy Hook school massacre in the face of heated opposition from gun owners that are part of the GOP base.