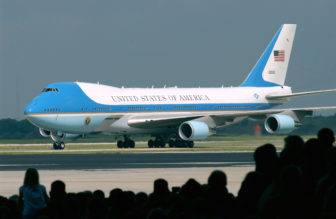 Washington – Rep. Jim Himes is in  Germany with President Obama for the G-7 meeting of major world economic powers, evidence of the president’s success in influencing key members of his party to vote for a trade measure considered a poison pill for most Democrats.

Immediately, organized labor knocked the trip — and said there would be a political price to pay for Himes’ support on the trade bill.

Himes announced last week he would join a small minority of House Democrats supporting the so-called fast-track bill that would help the president negotiate a new trade agreement with 11 Pacific Rim countries.

Known formally as trade promotion authority, the legislation would bar any amendments to a final Pacific Rim trade agreement, allowing Congress only an up-or-down vote on a negotiated deal.

Himes and three other Democratic supporters of the bill flew on Air Force One with the president to attend the yearly summit of seven of the world’s most industrialized nations.

Lori Pelletier, head of the Connecticut AFL-CIO, said Himes, D-4th District, has “poured salt on an open wound” by traveling to Bavaria with the president just a few days after he announced his support for the trade bill. Himes is the only member of Connecticut’s all-Democratic congressional delegation who supports fast-track.

“The labor movement as a whole was together on this, and we spoke with one voice, and Himes didn’t listen,” Pelletier said.

Others say Himes, a leader of the centrist New Democrat caucus, will survive and may even thrive politically from his decision, because he represents a district that has trended Democratic, but is still considered competitive.

“His numbers among Republicans will probably rise,” said Gary Rose, head of the political science department at Sacred Heart University.

Geoffrey Skelley of the University of Virginia Center for Politics said if Himes ultimately supports the Trans-Pacific Partnership, “it’s very possible that labor will offer him less monetary and organization support going forward.”

But the 4th District is “decently Democratic” Skelley said, having voted 55 to 44 percent for Obama in 2012.

“So even with less support from labor, Himes is by no means doomed,” Skelley said.

But the AFL-CIO’s Pelletier said, “This is one of those watershed moments” for Himes, and “people are already voicing” the idea of backing a primary challenger to Himes next year.

Himes said he decided to back the fast-track bill because free trade would benefit Connecticut exporters, especially those concentrated in the Fairfield County based 4th District.

Himes also said he reviewed the legislation carefully, as well as information that’s been made available about the current state of negotiations on the Trans-Pacific Partnership, and did not seen anything objectionable.

“What I have seen indicates that the president and his negotiators are pushing for strong standards on labor, the environment and other important issues,” Himes said.

Himes said Congress will have plenty of time to review a final trade deal, and that the fast track legislation is needed so Obama can continue to negotiate the TPP, which Himes said he would support if it contained strong labor and environmental safeguards.

Himes spokesman Patrick Malone said some of the other Democrats who boarded Air Force One to Germany “have been confirmed ‘yeses’ on the bill for a long time, so there’s just no quid pro quo here at all.”

The other Democrats on the trip are Reps. Gerry Connolly of Virginia, Eddie Bernice Johnson of Texas and Mike Quigley of Illinois.

The AFL-CIO says 30,000 union members live in Himes’ district, their political power boosted by the votes of spouses and other family members. Those labor votes are important to Democrats like Himes.

But Himes also receives strong support — in the form of votes and campaign cash — form Wall Street and business interests in his district.

At the end of March, 25 Connecticut businesses, including United Technologies, Diageo, General Electric, ESPN and Honeywell, wrote Himes asking him to support the fast-track bill. Himes was also wooed personally by Obama.

Pelletier said Himes is likely to have felt a debt to Obama because the president visited Bridgeport on his behalf on the eve of the lawmaker’s first election to Congress in 2008, when he defeated former Republican Rep. Chris Shays. Obama’s visit helped drive Democrats to the polls.

“We were there first,” she said.

Skelley said, “Granted, by percentage the Nutmeg State has the 10th-most unionized labor force, so organized labor remains a powerful entity there. But Himes has apparently decided the tradeoff is worth it for him.”

Rose said Himes disappointed some who attended Monday’s annual lunch of the Bridgeport Regional Business Council. Having travelled to Bavaria, the lawmaker could not fulfill his duties as keynote speaker, sending a video message instead.

But Rose said Himes’ vote for fast track will bolster his support among the business crowd – and will eventually be forgiven by Democrats.

“I don’t foresee any internal party challenge,” Rose said. “He’s still perceived as a good representative of the 4th District.”