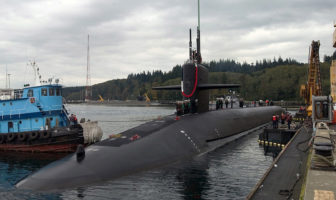 Washington – Rep. Joe Courtney has beaten back a challenge to a special fund that would pay for a new class of nuclear submarines as the House finished work on a massive defense spending bill with billions of dollars for Connecticut defense contractors.

The bill was approved on a 278-149 vote Thursday, with most House Democrats voting against it. All of Connecticut’s House members, except for Rep. Rosa DeLauro, D-3rd District, were among the 43 members of their party to vote for the bill. Usually approved on a bipartisan basis, the defense bill is embroiled in controversy this year because it contains several provisions the White House opposes.

Late Wednesday, the House voted 321-111 on an amendment sponsored by Rep. Randy Forbes, R-Va., and co-sponsored by Courtney that would reverse language in the bill that would prohibit Congress from funding the National Sea-Based Deterrence Fund. It was set up by Congress last year to pay for the Ohio-class replacement submarines outside of the Navy’s shipbuilding budget.

Forbes and Courtney are the chairman and top Democrat on the House Armed Services Seapower and Projection Forces Subcommittee.  Forbes represents Newport News, Va., a shipbuilding hub; and Courtney represents the Naval Submarine Base New London in Groton and Electric Boat, which hopes to build the Ohio-class replacement subs.

The sea-based deterrence fund was established by the House Armed Services Committee because of concerns the cost of the Ohio-class replacement submarines, estimated at about $6 billion apiece, would exceed the Navy’s shipbuilding budget.

But opponents said establishment of the fund — that could be financed with money diverted from other accounts in the Pentagon — is a gimmick that would hide the real cost of the lethal new class of submarines.

“Establishing a special fund is an attempt to have the other military services pay for what is a Navy responsibility, “ said Rep. Rodney Frelinghuysen, R-N.J., during debate on the amendment. “It is the wrong approach. It removes congressional oversight over the Secretary of Defense…”

With the use of a chart, Courtney demonstrated that the costs for Navy building are expected to surge and “Congress is going to be asked to raise unprecedented amounts of money for the shipbuilding account.”

“This is an asset that is not just the Navy’s, but the country’s,” Courtney said. “It will be borne by the submarine program far greater than in the past. The Air Force and long-range bombers and the Army are not going to be bearing the same burden.”

Courtney’s efforts on behalf of the fund were bolstered by a voice vote later in the evening on an amendment that would give the Defense Department flexibility to transfer up to $3.5 billion in unobligated monies into the sea-based deterrence fund.

While the House Appropriations Committee resisted funding the sea-based deterrence fund, it supported continued work on the Ohio-class replacement boats.

The Navy plans to begin building a force of 12 nuclear-powered ballistic missile submarines, with 16 missile tubes each, beginning in 2021. But it is spending millions of dollars on research and development of the boats now.

The $579 billion 2016 defense spending bill would be a boon to Connecticut’s defense industry. It would fund two new Virginia-class submarines built by Electric Boat, provide $8.4 billion for 65 F-35 Joint Strike Fighters whose engines are produced by Pratt &Whitney, and $1.6 billion for 102 Sikorsky UH-60 Blackhawk helicopters.

The defense bill would also provide money to continue work on two new helicopter programs involving Sikorsky: the Marine One presidential helicopter and a new fleet of search and rescue helicopters for the Air Force.

The Senate has begun working on its defense appropriation bill this week.

But the House bill has, and the Senate bill may, provoke a veto threat from the White House.

The Office of Management and Budget this week recommended President Obama veto the House defense bill because it adheres to spending caps put in place by the 2011 Budget Control Act but boosts defense spending by increasing by $38 billion a war funding account that is not subject to the caps.

Obama and congressional Democrats argue the caps should be lifted for both defense and nondefense spending and that the $38 billion put into the war fund should instead be put into the Pentagon’s base budget.

The OMB also objected to language in the defense bill that would prohibit the administration from moving on a new round of base closings.