Washington – Rep. Rosa DeLauro may be on the brink of losing a key battle in the fight over a new Pacific Rim trade pact, but that’s not likely the end of the lawmaker’s campaign to oppose it.

GOP House leaders have scheduled a vote on trade promotion authority legislation, also known as the “fast track” bill, on Friday. The bill, which has already been approved by the Senate, would allow President Obama and whoever succeeds him six years to negotiate trade pacts that cannot be amended by Congress, only voted up or down.

Obama said he needs fast track authority to successfully negotiate the 12-member Trans-Pacific Partnership. Most House Republicans and about two dozen House Democrats, including Connecticut’s Rep. Jim Himes, mayo give the president a narrow victory Friday when the vote is held on the legislation.

DeLauro on Wednesday was not ready to throw in the towel.

“We know that the vote is coming,” she said. “It’s coming quickly and we are committed to redoubling our effort in these last remaining days or hours in order to defeat fast track.”

The issue has forged an uneasy alliance between Obama and congressional Republicans.  But the fast track bill, and the Trans-Pacific Partnership, has been strongly opposed by most Democrats, organized labor, environmental groups and consumer protection organizations who say it would result in the loss of U.S. jobs and weaker regulations.

DeLauro said the trade pact would “do nothing but eviscerate the jobs and wages of working men and women in America.”

Most House Democrats will vote against the fast-track bill. DeLauro is credited for holding that block of opposition together, although Himes, D-4th District, angered  organized labor by saying he will be in the small minority of members of his party to vote for fast track. Himes said he supports the fast track bill because Connecticut is a big exporter of goods and would benefit with better access to Pacific Rim markets.

Giving the president trade promotion authority isn’t the end of the story, however.

The Trans-Pacific Partnership, which would include nations that ring the Pacific Ocean, including Japan, Chile, Canada and Australia, has been under negotiation since 2012.

A dozen rounds of talks have been held, negotiations slowed by the difficultly of Japan and the United States to reach agreements on issues concerning automobiles and agriculture.

A new round of talks is expected in July, but that won’t be the end of the process.

Republicans on the House Ways and Means Committee on Wednesday predicted there would be another four rounds of negotiations. And the fast track bill would require the Congress to have at least 60 days to study the final agreement before lawmakers vote to accept or reject it. 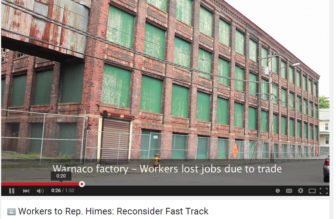 The abandoned Warnaco factory in Bridgeport featured in a video critical of Rep. Jim Himes stance on the “fast track” bill.

“That’s 60 days for the American people to read the deal,”a statement from the Republican leadership of the House Ways and Means Committee said. “Only then does it go to Congress where there’ll be another month or two of debate… and if a deal doesn’t meet Congress’s standards, Congress can vote it down. Simple as that.”

The timeline gives DeLauro and others who oppose the trade pact time to continue their campaign. In many ways, the fight over the TPP is a replay of the political battle over the North American Free Trade Agreement, or NAFTA, which pitted DeLauro against another Democratic president, former President Bill Clinton.

The Connecticut AFL-CIO, which like its parent organization fought against the fast track bill, on Wednesday took aim at Himes for his support of the legislation.

It released a video showing the crumbling parking lots and dilapidated buildings of the former Warnaco and Remington Shaver factories and other shuttered companies in Bridgeport.

“This is the impact on trade on the 4th District,” Connecticut AFL-CIO president Lori Pelletier says in the video.

Himes spokesman Patrick Malone said  foreign trade did not shut down the factories.

“Let’s set the record straight – U.S. trade policy did not cause the shutdown of the two factories featured in this video, Remington Shaver and Warnaco,” Malone said.

He said Warnaco  faced a series of hostile takeovers and bankruptcies over the course of three decades, and the company moved from Bridgeport to Milford, where it was eventually acquired and shut down by a New York-based company in 2013 and  Remington was moved by its parent company to Wisconsin in 2005.

“While it’s a blow to Bridgeport whenever a company leaves, New York, Milford, and Wisconsin aren’t foreign countries or signatories to a free trade agreement,” Malone said.

Connecticut AFL-CIO spokesman David Dal Zin said “while it’s difficult to determine exactly why a factory was closed, workers at both Remington and Warnaco received trade adjustment assistance” which indicates their loss of jobs was trade-related.

The fast track legislation includes new funding for a program designed to help U.S. workers who lose jobs to international competition, known as Trade Adjustment Assistance. That program is supported by Democrats but faces opposition from Republicans who consider it a form of welfare.

So there will be a vote on the fast track bill and a separate vote on the legislation that would boost the trade adjustment assistance program.

The bitter debate over the Trans-Pacific Partnership is a rare split between the White House and congressional Democrats, but DeLauro minimizes the impact of the rift.

“We are long-time supporters of the president on a variety of issues,” she said. “We disagree with him on this issue and this is in keeping with American democracy.”