A nonprofit and an accountant join anti-tax chorus 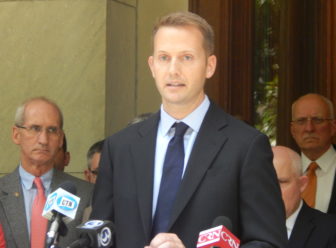 The Connecticut Business and Industry Association brought a new voice Monday to its campaign to roll back state tax hikes — a major Hartford-based job development nonprofit.

During a midday rally outside the Capitol, the CBIA also tried to undercut one of its opposition’s chief arguments: that Connecticut businesses are profitable enough to afford more taxes.

While anti-tax advocates have warned frequently in recent weeks about the impact of tax hikes on the economy, and on job growth in particular, Adrienne W. Cochrane, president and CEO of the Urban League of Greater Hartford, said Monday that state officials should consider the impact on private nonprofits, including many social services.

“To lose the support of our corporate and business partners would strike a fatal blow to many non-profit organizations,” she said.

The Urban League operates a variety of job training, adult education and youth development programs in the Capitol region, said Cochrane, who stressed the impact of business and corporate partners on non-profit organizations through their contribution of unrestricted dollars and donations.

Unrestricted dollars represent a significant part of how non-profits operate because they can be used to cover some infrastructure and operating costs, unlike donor-designated dollars. Without proper operational support, basic programs could face cutbacks and become less effective, she said.

The CBIA has been leading the charge to scale back tax hikes in the $40.3 billion, two-year budget that legislators sent to Gov. Dannel P. Malloy just before the regular legislative session ended on June 3. The governor hasn’t yet signed the plan.

This budget levies about $1.5 billion in tax hikes over the next two fiscal years and cancels several previously approved tax cuts worth close to $500 million over the biennium. The majority of that new revenue involves taxes on hospitals, corporations and a tripling of the sales tax on data processing and other online services.

Malloy surprised his fellow Democrats in the House and Senate majorities on June 12 when he proposed canceling tax increases worth $224 million, and replacing them with cuts mainly aimed at social services, health care, municipal aid and higher education.

The governor has received strong statements from major corporations like General Electric, Aetna and Stanley Works warning the tax hikes would harm the economy and possibly lead companies to leave the state.

But this sparked a sharp response last week from advocates for social services and health care, who argued the tax increases are needed to spare a safety net that already is straining to meet demand for services.

One of the arguments raised against the governor’s latest proposal involves an annual report prepared by Ernst & Young, a global accounting firm. It shows state taxes are high, but so is the productivity of Connecticut companies.

A comparison of state and local taxes as a percentage of gross state product shows Connecticut tied for the second-most favorable ratio among all states. Businesses here are 25 percent more productive than the national average.

But Andrew Phillips, a tax services principal with Ernst & Young, said at Monday’s press conference, that Connecticut has several rankings in E&Y studies that are not so favorable to businesses.

Overall state and local taxes here are 57 percent above the national average, Phillips said, and Connecticut businesses already struggle with high costs outside of taxes in areas such as transportation, labor and energy.

Connecticut’s marginal tax rates on new business investments — which are particularly important to manufacturers — are 10 percent higher than the national average, he said.

“The results of the study should not be interpreted to mean Connecticut is a low-tax environment,” Phillips said.

The CBIA also is urging lawmakers to reconsider a series of studies commissioned by a Connecticut business coalition and designed to reduce state spending by hundreds of millions of dollars per year.

These reports, prepared for Connecticut Regional Institute for the 21st Century by BlumShapiro and published between 2010 and 2013, seek to drive down state spending through structural changes to: long-term nursing care; the prison, parole and probation systems; public sector employee retirement benefits; general delivery of public services; state-sponsored social services; governmental use of technology.

“We really need to take some dramatic action,” said Paul Timpanelli, president of the Bridgeport Regional Business Council, who also serves on the steering committee for the Connecticut Regional Institute.

These studies have drawn too little attention, Timpanelli said, adding that the alternative to significant spending reforms has been to pursue tax hikes at the expense of the state’s economy.

“We can continue to tax ourselves to death,” he said, “and we will never solve the problem.”