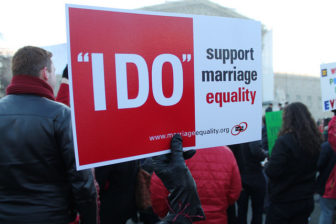 Gay marriage advocates and opponents have been demonstrating outside the Supreme Court periodically for years.

Washington — Gay rights advocate Mary L. Bonauto made history in Connecticut when she championed a lawsuit that legalized gay marriage in the state.  She is now in position to make it on the national stage when the U.S. Supreme Court rules on a landmark gay marriage case.

The stakes are high as Bonauto awaits the court’s decision on a case she argued in April.

The ruling, which could come as early as Thursday, will decide the fate of gay marriage in many states in the nation and could, in one observer’s words, “nationalize same-sex marriage.”

It could also have an indirect impact on married, same-sex Connecticut couples. In 2008, Bonuato helped fellow attorney Ben Klein win a 4-3 decision at the Connecticut Supreme Court that determined that the state’s recognition of same-sex civil unions, a marriage-like legal arrangement that Connecticut offered to gay couples since 2005, was not an acceptable alternative to marriage.

Bonauto, the civil rights project director for Boston-based Gay & Lesbian Advocates & Defenders, also won a 2003 Massachusetts case that resulted in that state’s being the first to legalize gay marriages.

About a year later, Bonuato filed the Kerrigan case on behalf of gay and lesbian couples who were denied marriage licenses in Madison. Klein, who argued the Kerrigan case before the Connecticut Supreme Court, called the decision in the case, a “watershed moment” in the gay rights movement. That’s because it was decided in November of 2008, just after California voters struck down gay marriages in that state.

California had been the second in the nation to legalize gay marriages. “To see same-sex couples marry in Connecticut after the crushing blow in California was immensely important to the future of the marriage equality movement,” Klein said. “It maintained the momentum.”

The case before the U.S. Supreme Court concerns Ohioans James Obergefell and John Arthur, who had been together for 20 years when Arthur was diagnosed with A.L.S. in 2011. About two years later, the couple traveled to Maryland, a state that, unlike Ohio, allowed same-sex marriage, so they could be wed.

Arthur died a few months later at the age of 48. Ohio refused to recognize Obergefell’s status as surviving spouse. “The intimate and committed relationships of same-sex couples, just like those of heterosexual couples, provide mutual support and are the foundation of our society,” Bonauto told the justices during oral arguments in April

The Ohio case was consolidated with similar ones from Tennessee, Kentucky and Michigan. But the impact of the Supreme Court’s ruling would extend far beyond those states.

If the court rules in favor of Obergefell, the ban on gay marriage would collapse across the nation. On the other hand, the court could decide that states aren’t constitutionally required to issue marriage licenses to same-sex couples.

If so, marriage in 21 states where federal courts have struck down same sex-marriage bans could be legally unraveled, leading to an avalanche of lawsuits. Connecticut’s legalization of gay marriage was established by a state court and bolstered by a state statute, so it would not be threatened.

But there would still probably be an impact on the state, some say. Peter Wolfgang, executive director of the Family Institute of Connecticut, is concerned the Supreme Court’s ruling could nullify a Connecticut law that says churches and religious organizations cannot be  forced “to provide services, accommodations, advantages, facilities, goods or  privileges” to a married same-sex couple, or be forced to admit or distribute benefits to them or provide adoption, foster care or social services to a married same-sex couple.

The institute opposes same sex marriages and tried, unsuccessfully, to join the Kerrigan case. Wolfgang said the institute wanted to be involved because it did not think Sen. Richard Blumenthal, a liberal Democrat and then Connecticut’s attorney general, would defend the state’s decision to deny same-sex couples marriage licenses with enough vigor.

“All he did was say same-sex marriage was not necessary because we have civil unions,” Wolfgang said. “He did not speak of the sanctity of [traditional] marriage.”

Blumenthal and fellow Connecticut Sen. Chris Murphy are among 44 U.S. senators who joined an amicus brief filed in the Obergefell v. Hodges case. It argues that the Supreme Court should not discriminate against gay couples.

Every member of the Connecticut delegation to the U.S. House of Representatives also joined the friend-of-the-court brief, as did more than 160 other House members. To Susan R. Schmeiser, a professor at the University of Connecticut School of Law, the impact of the Supreme Court ruling in Connecticut would center on “portability” or new protections for the state’s gay married couples when they travel.

“It could nationalize same-sex marriage,” she said. Connecticut same-sex couples would not only have their rights as spouses upheld in all other states, but also have an easier time divorcing or establishing parental rights out of state, Schmeiser said.

Klein said a gay rights victory at the Supreme Court “would ensure the security of people who marry in Connecticut that their marriages are protected when they cross state lines.”

Janet Peck and her partner for decades, Carol Conklin, were plaintiffs in the Kerrigan case and one of the first same-sex couples to marry in Connecticut. Peck said she and Conklin, who live in Colchester, have recently retired and “our dream is to travel.”

“It would be nice if every state recognized our marriage,” she said. “It’s time for this country to treat gays and lesbians equally.” Peck said she hopes the Supreme Court strikes down gay marriage bans in time to celebrate the 40th anniversary of their relationship. “It would be a great gift for us.”