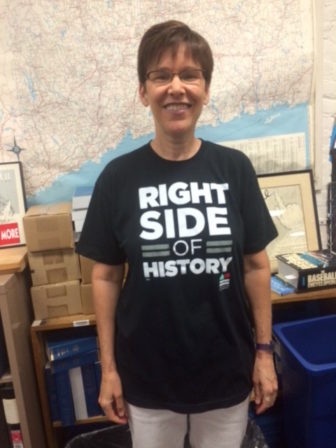 The U.S. Supreme Court’s 5-4 decision Friday declaring same-sex marriage to be a right under the Constitution was celebrated by politicians and activists in Connecticut, a state that banned housing and employment discrimination based on sexual orientation in 1991 and legalized same-sex civil unions in 2005 and marriage in 2008.

The decision was handed down on Pride Day, an annual observance in the gay community. It will be celebrated at 5 p.m. at the Hartford Pride observance at the Old State House in Hartford.

Anne Stanback, a founder of Love Makes A Family, a coalition that successfully has fought for a wide range of rights for the LGBT community in Connecticut, wore a black t-shirt Friday with the message: Right Side of History.

“There will be some people who oppose this for sure, but most people will either be celebrating — or just move on with their lives,” Stanback said.

Stanback said the distance the gay rights movement has traveled is hard to fathom. During a debate over an anti-discrimination bill that failed in the late 1980s, a legislator questioned the need for the law, saying he had never met a gay person.

“His comment was certainly pivotal for us in Connecticut, because we vowed at that point that we would never let another legislator or elected official be able to say they didn’t know a gay person, that there were no gay people in their districts,” she said.

“We had constituents meet with legislators in their own  homes…and more than anything, really, give legislators a chance to know us, normalize who we were. And that’s been a strategy that we took through the gay rights bill fight, onto the marriage fight,” she said.

A sampling of reactions to the decision:

“This decision provides me with personal relief that – no matter where I travel across this great nation of ours – my marriage will be recognized…This victory follows years of determination, effort and countless hours of legal work. I’m grateful for those whose shoulders we stand on today. This is the just and right decision.”

“Today’s decision marks a historic moment in U.S. history and reaffirms everything that this great nation stands for – equality, liberty, and justice for all.  It’s a day that Americans across our state and country can celebrate.  While the State of Connecticut has recognized marriage for same-sex couples since 2008, today’s ruling means that our residents cannot lose their marriage rights while traveling from state to state.  In short, couples will get the equality under the law that they rightfully deserve.  My wife Cathy and I proudly join all of our friends, both gay and straight, to celebrate today’s ruling and its recognition that the Constitution of the United States serves to protect the rights of all its residents equally.”

“This decision marks a victory for equality and inclusivity.  At a time when our nation is again facing devastation wrought by violence and bias, this ruling reconnects us to our humanity – our common desire to establish safe communities, build strong families, and be treated fairly and justly under the law.  I’m grateful to the pioneers, the leaders, the lawyers, and the couples that stood up to intolerance and bias.  These men and women who fought a decades-long war to get us to today.  Today’s victory furthers us as a nation, one that is committed to all of our citizens.”

“I am delighted by the Supreme Court’s ruling upholding a nationwide, constitutional right to marriage equality.  I applaud the Court for guaranteeing equality for same sex couples previously denied the right to marry. This decision is also an important vindication for couples in Connecticut whose marriages were previously denied recognition and respect in all states. Indeed, every American benefits by today’s reaffirmation and extension of our national commitment to equality and human dignity – principles at the very heart of our constitutional system of government.”

“This ruling reaffirms why we are the greatest, freest nation in the history of the world – because we respect every individual’s equal right to liberty, no matter where they live, who they are, or whom they love. Today will go down in history as momentous for all Americans, making our nation an even brighter beacon of hope and opportunity for all.”

“Today I feel so proud to be a citizen of a country that can have the courage to get right what it got wrong for so long. Who you are, who you love, and what you feel should never be reasons for discrimination. Though we have a long way to go, the Supreme Court’s decision on marriage equality this morning takes a giant stride toward eliminating such prejudices across all institutions in America. I’m thrilled that the justices ruled in favor of common sense and equality, and I stand with them in my unwavering support for the LGBT community.”

“Congratulations to every American today. I am proud to live in a country that continues to call for true equality.”

“All Americans deserve equal protection under the law, and we still have hills to climb to ensure that LGBT Americans cannot be discriminated against in the workplace or denied other rights and benefits. For today, advocates and allies who have worked to advance this cause should pause to reflect on this momentous achievement.”

“I am thrilled that the Supreme Court has recognized the right to marriage for all Americans, regardless of who they love. Barring LGBTQ Americans from marriage violates the values we hold dear — justice, freedom and equality. It makes no difference whom someone loves and denying them the same rights as heterosexual couples is just plain wrong. Today’s decisions will make us a stronger, fairer and better nation.”

“This is a monumental and historic day. I am deeply moved by the millions of men and women who have campaigned tirelessly to change hearts and minds across the country, and grateful that the Supreme Court has recognized that the right to love and marry is fundamental. The fight for equality and against discrimination is never over, but today’s decision is a huge victory.”

“But let’s remember: This struggle is far from over. This is personal for many families, including my own. My brother had the courage to come out in 1978, when equality was still a distant dream. We still have work to do in our efforts to advance equal rights for all Americans. We need to ensure that no one is denied employment, housing, opportunities, or benefits because of their sexual orientation.”