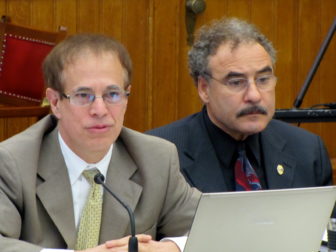 A new agreement that restores a more lenient standard for awarding state disability pensions will take effect immediately and won’t be presented to the General Assembly for consideration in 2016, Gov. Dannel P. Malloy’s administration confirmed Thursday.

The agreement, signed by the governor’s chief labor negotiator and ratified Thursday by state employee unions, is considered a “clarification” of an existing labor-management practice, and legislative approval is not required, both parties said.

That runs counter, though, to the recommendation of the state Auditors of Public Accounts, John C. Geragosian and Robert M. Ward.

The auditors, who first notified Malloy in June of a “breakdown” in the disability pension system that may have cost the state millions of dollars in improper payments, had recommended that lawmakers rewrite the pension statutes.

And Comptroller Kevin P. Lembo said Thursday that his office would prepare for immediate implementation of the agreement, pending its own review of the matter.

The SEBAC leadership, which includes representatives of the 15 state employee unions – which, in turn, cover 34 bargaining units – agreed by unanimous consensus Thursday morning to ratify the deal, Livingston said.

“We’re glad we were able to work with SEBAC and reach agreement on it,” Gian-Carl Casa, spokesman for the state Office of Policy and Management, said.

The Office of Labor Relations, an office within OPM, negotiated the memorandum with SEBAC.

Both Livingston and Casa said the agreement – a memorandum of understanding on how the state will administer disability pension benefits established in law – is a “clarification” of this process. And because the parties don’t consider it to be a new contract or a contract amendment, it will not be submitted to the legislature for action.

In a special June 17 report to the governor, auditors detailed a problem that also was highlighted in a lawsuit filed one month later by state whistleblower Virginia Brown, a former attorney with the retirement services division in the comptroller’s office.

Both the auditors and Brown assert that, at times, workers have been allowed to maintain disability pay as long as their injury prevented them from returning to their original job.

But the leader of one of the largest state employee unions, said the standard has been enforced, at times, in too stringent and unfair a fashion.

Salvatore Luciano, executive director of Council 4 of the American Federation of State, County and Municipal Employees, said the state had tried to place police troopers and prison guards, injured from physical attacks and sometimes suffering from post-traumatic stress disorder, in manual labor jobs that didn’t recognize the seriousness of their injuries.

Lembo, who began as comptroller in 2011, also had concluded the State Employees Retirement Commission had been applying the “suitable and comparable” standard too leniently and not in compliance with state law.

After undertaking his own review, Lembo instructed the state’s Medical Examining Board to employ a more stringent standard at meetings in September and October 2013.

But after a significant increase in denials of disability pensions, Lembo suspended all 24-month medical reviews and urged the administration and unions to negotiate a common understanding on how the statutory standard should be interpreted.

Livingston said those who received disability benefits and were not subjected to the 24-month review during the suspension period now would receive reviews under the standard spelled out in the memorandum.

“I certainly am pleased they have come to an agreement,” Lembo said of the deal ratified on Thursday.

The comptroller declined to comment on the details of the agreement other than to say, “We are in the process of reviewing the language.”