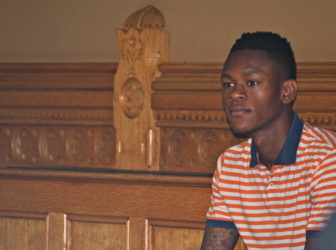 Ibrahim Adegona still doesn’t understand why he was arrested at school for getting into a disagreement with his girlfriend.

“It was an argument,” the junior at Harding High School told a roomful of state officials and advocates at the state Capitol Tuesday. “To put my hands behind my back and arrest me in front of everybody, it really hurt me.”

After spending two weeks in jail while he waited to be adjudicated for risk of injury to a minor, Irbrahim returned to Harding High School in Bridgeport, where he says he found no help to improve his behavior.

Several stories similar to Ibrahim’s were shared at a forum at the state Capitol Tuesday on the so-called “school-to-prison pipeline.”

Often trouble starts with a student who is suspended multiple times and escalates to an arrest. About one quarter of arrests in the school year that just ended were for assault or threatening behavior, while the rest were for breach of peace, disorderly conduct or possession of less than half an ounce of marijuana. 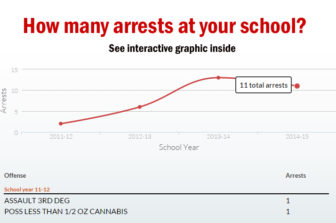 In all, 1,738 children were arrested while at school – a number that has increased since the state began tracking school-based arrests four years ago.

Data shows that black and Hispanic students are being arrested and suspended, disproportionately, and a state watchdog agency reports that more students than ever have filed discrimination complaints over the last two years.

“Dozens and dozens of cases are being filed with us now. They are being filed at an alarmingly fast rate,” said Cheryl A. Sharp, deputy director of the state Commission on Human Rights and Opportunities.

Last school year, black and Hispanic students accounted for 62 percent of school-based arrests while they accounted for 35 percent of public school students. The governor’s Office of Policy and Management reports black youth are five times more likely that their white peers to be referred to juvenile courts. Hispanic youth are twice as likely.

Eight out of every 10 youth at the Connecticut Juvenile Training School (CJTS) — the state’s locked jails for adjudicated boys — are black or Hispanic.

“Black students, Hispanic student don’t misbehave more than white students, so there is something more at play,” said Regina Hopkins, who works at the State Department of Education but said she wasn’t speaking for the department. The punitive measures, she said, are based on “how adults approach, conceptualize, interpret behaviors of students.”

Joyhissa Bouknight, a junior at Hamden High School, said she’s found herself in trouble too easily while her white peers get off with a warning for the same offense.

“They are just waiting for me to mess up,” she said. “I don’t like the standard they hold me to.” 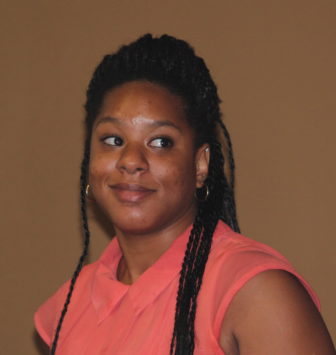 The most common offense students are charged with is breach of peace, a charge several panelists said police are too quick to lodge.

“It’s not hard to get charged with a breach of peace. If I throw this pen across the room, I can be arrested for breach of peace,” said Christine Rapillo, director of delinquency defense with the state’s public defender’s office.

State legislators have passed several laws and provided additional funding aimed at resolving some of these problems. A new state law requires every region in the state to have a Juvenile Review Board so that schools and police departments have an alternative to the courts where children can get the therapy and treatment programs they need.

Not getting youths the help they need too often leads to their acting out and ending up in jail, advocates say. One-third of the youths at CJTS have “significant mental heath disorders” and about 90 percent have two or more psychiatric diagnoses, a recent review of the jail found.

An additional $1 million was also provided in the state budget so the School-Based Diversion Initiative could be expanded to 12 more districts. That initiative trains school staff on how to respond to poor behavior without automatically going for the severe option of suspension or arrest. It also trains school staff on the mental health resources available for students.

“We must break a cycle that criminalizes students in need of intervention and help them outside of the criminal justice system,” Gov. Dannel P. Malloy, a Democrat, told the audience. “When a young person or child acts out, in many cases it is a cry for support, and in many cases we fail to respond appropriately, and that’s what we are trying to do now.”

A new state law also requires that schools enter into agreements with police departments before an officer is assigned to work in a school. Those agreements will outline the role of the officer, and when arrests are and are not appropriate.