Blumenthal: Rail safety violators must be fined, but not Connecticut 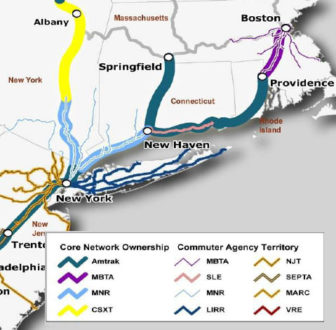 A map of railroad lines in the state and their owners. MNR is the MetroNorth Railroad, whose tracks in Connecticut are owned by the state.

Washington – Sen. Richard Blumenthal wants the Federal Railroad Administration  to fine those who fail to meet a Dec. 31 deadline to implement rail safety technology called Positive Train Control — but he would spare Connecticut from punishment.

“Our nation’s rail passengers require more than hollow rhetoric and sluggish action by regulators and railroads,” Blumenthal said. “I am calling on the FRA to impose stiff and severe penalties on railroads who were provided seven years — ample and adequate time — to meet these deadlines.”

The senator’s campaign was prompted by a report released this week by the FRA that said most railroads are expected to miss the year-end deadline to implement Positive Train Control. But the FRA has not determined what kinds of fines should be imposed on those who failed to meet the federal regulations.

While Blumenthal is calling for tough punishment for those rail companies, he’s willing to make an exception for the state of Connecticut, which, like the nation’s railroads must implement PTC because it owns hundreds of miles of track in the state.

The Connecticut Department of Transportation said PTC would not be implemented on the tracks the state owns in Connecticut until 2018, at least two years after the deadline.

The transportation department says it has secured $115 million to implement PTC on the New Haven Line — $87.3 million from the FRA and about $28 million in state bond funding that’s already been approved.

Department spokesman Judd Everhart said the state expects another $22 million later this year from FRA and another $5 million in state bonding, for a total of $142.6 million for the project.

Blumenthal said the state is making a “good faith effort” to comply with the federal regulations regarding PTC, drafted after two trains crashed head-on in California in 2008, killing 25 people.

The issue came into focus again after a speeding Amtrak train crashed in Philadelphia in May, killing eight people and injuring more than 200. PTC technology would have stopped that train and probably kept it from crashing, rail experts say.

Using sensors placed on the tracks and technology in locomotives and rail cars, PTC monitors trains and can automatically slow or stop them if they are going too fast or are in danger of colliding.

Amtrak has implemented the technology on about 400 miles of its track on the Northeast corridor, but not on the track where the train crashed in Philadelphia and not on Amtrak’s line from New Haven to Springfield, Mass., through Hartford.

Blumenthal said “further delay at the expense of passengers’ lives and safety is inexcusable and unacceptable.”

At a press conference at New Haven’s railroad station on Wednesday, Blumenthal also called on Metro-North to complete installation of the technology “immediately.”

There is no PTC technology on Metro-North’s routes in the state. Metro-North received nearly $1 billion from the FRA to install that technology.

“For railroads like Metro-North—which has funding in place to complete this work — I am demanding an end to the delays,” Blumenthal said,

Yet the senator said Metro-North could also be spared fines if it, like the state of Connecticut, showed a “good faith” effort to implement PTC by 2018.

Everthart said, “Connecticut and Metro-North are making a good-faith effort toward getting PTC in place as soon as possible.”

Blumenthal also said other railroads should have their deadlines extended to 2018 on “a case-by-case” basis if they also secured funding and had taken substantial steps to implement the rail safety technology.