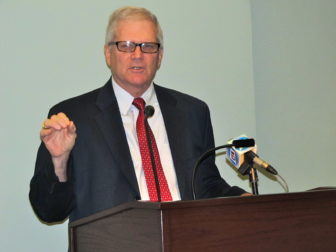 Gregory Gray, president of Connecticut State Colleges & Universities, his first day on the job in 2013

Gregory Gray, the embattled president of the state’s largest public college system, notified his board in a one-sentence resignation letter Friday that he will step down on Dec. 31.

“This decision was purely a personal one, arrived at after a number of months of consideration and discussion with my family,” Gray said Friday in a statement. “There is still much more to be done for the CSCU system and its students. However, I will leave believing that we have accomplished a great deal for our students and for the State, and laid a solid foundation for the future.”

With the departure of Gray after two years at the helm of the 90,000-student college system, the Board of Regents for Higher Education faces the familiar task of finding a new leader.

Since the state’s dozen community colleges, four regional state universities and an online college were merged into one college system three years ago, the system has had two presidents and two interim leaders.

It’s unclear whom the regents will tap, but sources say people who have been considered for the interim post include Mark Ojakian, the governor’s outgoing chief of staff, and Elsa Núñez, the president of Eastern Connecticut State University.

After The Mirror reported in July that the regents were planning for the departure of Gray, Regents Chairman Nicholas Donofrio said during an interview that the board had no intention of forcing him out.

Gray’s resignation letter was terse: “Please be informed of my intent to resign my position as President for the Connecticut State Colleges and Universities as of Dec. 31, 2015.”

“The Board of Regents will consider President Gray’s letter shortly, but we will do so with regret,” Donofrio said. “It is important to note that the decision was Greg’s alone, and that we know he arrived at this decision after much thought and discussion with his family.”

Previously, Donofrio has declined to answer questions about whether the board was negotiating the terms of Gray’s departure before the expiration of his $380,000-a year-contract, which guaranteed him a job through June.

“It’s not appropriate. It’s not right to share that,” said Donofrio. “That is a discussion between me and the board. That’s a personal personnel matter. Why would we want to be discussing that in public?”

A board spokesperson said Friday that no separation agreement has been reached, and it was uncertain if Gray would be paid after Dec. 31.

Donofrio has insisted he supports the work Gray has completed during his short tenure.

“I think Greg has done a fine job in a difficult situation,” he said.

Many faculty feel differently. Teaching staff at all four regional Connecticut State Universities and seven of the community colleges have cast votes of no confidence in Gray’s leadership.

Gray — who has more than 40 years of experience in higher education administration — has had a splintered relationship with faculty since he spent $1.97 million hiring outside consultants to craft a controversial plan for the future of the college system. Faculty feared that plan would strip them of their academic independence.

Attempts to reconcile have failed. Though the no-confidence votes have no legal impact, they highlighted the faculty frustration.

Gray’s relationship with key state legislators deteriorated after he approved the closure of a community college campus in Meriden in response to proposed budget cuts. That campus was located in the district of Sen. Danté Bartolomeo,  co-chair of the legislative committee that oversees higher education.

“Why stay, Dr. Gray?” Bartolomeo posted on Twitter last month as speculation circulated on his future as the leader in the system.

“I’ve been pretty clear about the fact I didn’t think he was the right person with the right philosophy,” Bartolomeo said Friday.

Bartolomeo said that the next president should be someone who embraces the mission of the system, particularly its community colleges: ensuring that education is both accessible and affordable.

Mark Pazniokas contributed to this report.