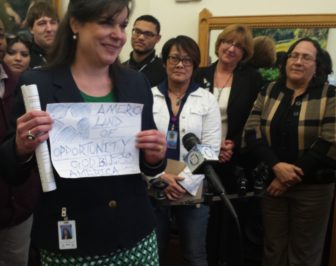 The Senate moved swiftly Wednesday to stop a surprise plan to close a community college satellite campus in a district represented by the co-chair of the legislature’s committee on higher education.

On a unanimous vote, the Senate passed a bill that requires legislative approval to close any higher-education campus or manufacturing program.

The plan to close the Meriden campus of Middlesex Community College was viewed by a key legislator as a personal affront that raised questions about the fitness of Gregory W. Gray, president of the Board of Regents for Higher Education.

“It’s not lost on me that the only closure out there appears to be mine,” said Sen. Danté Bartolomeo, D-Meriden, the co-chair of the Higher Education and Employment Advancement Committee.

The Senate bill now heads to the state House of Representatives. The Meriden delegation hopes it will be voted on when the chamber convenes Tuesday.

“I would like to have a better understanding what other options the Board of Regents has available to them,” he said. “I need more information to better understand what are the other options they could pursue to avoid that closure. I have been asking for more information from the board…I don’t want to simply be saying, ‘No, don’t close this.’ I want to have an alternative that could be considered.”

State legislators are grappling with cutting hundreds of millions of dollars from various social service and education programs as they work to close the state’s $1.3 billion deficit. The governor’s budget proposed cutting funding to the Board of Regents by $20.5 million next fiscal year, leaving it with a $48.6 million budget gap.

The Board of Regents oversees the Connecticut State Colleges and Universities system, which includes the state’s 12 community colleges, four regional universities and online school.

“We are not in favor of the amendment as worded,” Kozlowski said. “These types of operational decisions are better left to the college or university administrators at the campuses, as was the case with the Meriden proposal. These administrators are closest to their programs and their students, and are ultimately responsible for the management of their budgets and institutions.

“Closing a $48.6 (million) gap for next fiscal year leaves CSCU with only difficult options, especially in institutions that absorbed budget rescissions of over $7 million in the current fiscal year alone,” Kozlowski said. 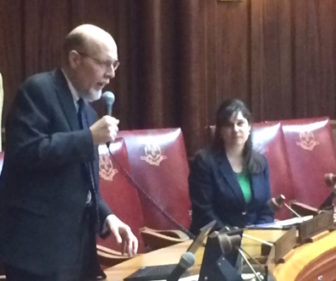 In the Senate debate, Bartolomeo had support from Senate Minority Leader Len Fasano, R-North Haven. He said that he interpreted the unexpected announcement of the Meriden closing as a provocation to legislators as they work on the budget.

“To unilaterally decide to close an institution that people rely on, well then, we should react, and we should kick hard,” he said.

The campus closure was part of an effort to cut $22 million in expenses from the CSCU system. The closure was expected to save less than $1 million next school year.

State law requires the Board of Regents to vote on any college closure or merger. No vote has taken place to close this campus.

Senators on Wednesday questioned the process leading to the decision to close the Meriden campus, and the lack of transparency.

“No notification was the wrong course of action,” Sen. Kevin D. Witkos, R-Canton, said during the Senate debate. “I find that concerning.”

Sen. Steve Cassano, D-Manchester, said that with the college’s central office employing 163 people, someone might have found the time to notify legislators.

“I would have thought out of those kinds of numbers that somebody could find the chairs and the ranking members, particularly on something like this,” Cassano said.

And what about other cuts the system is planning?

“I don’t know what happened to the rest of the whole community college and four-year school system because we don’t have that information,” said Cassano, suggesting changes be made in law to require more public notification of cuts being considered.

System officials told the Mirror this week they will not disclose the cuts they are considering, and the public will be informed after decisions have been made.

“It would be irresponsible and misleading to place the larger lists of ideas discussed in the public forum for discussion and response. To disclose that would, in our mind, serve no compelling public purpose,” CSCU’s Kozlowski said in response to Mirror requests for the reduction plans individual school presidents have provided to the central office.

Bartolomeo said she has seen no alternatives that were considered, either. She said the decision to close a campus that now serves 640 students and has been growing seemed chosen because it was in the district of a legislator who oversees higher education.

“I certainly can’t imagine anything else,” she said. “The numbers don’t even work out.”

By acting to block the plans at the first available opportunity, the Senate leadership delivered a pointed rebuke to Gray.

Gray would fail to heed that rebuke at his peril, regardless of whether the House ultimately concurs with the Senate, Bartolomeo said.

“If this isn’t enough for Dr. Gray to immediately stop what’s in motion, turn it around and begin enrolling students at the Meriden center, then I would seriously look to the Board of Regents to try to find a new president,” she said.

Legislators in recent months have taken aim at Gray’s spending priorities for the 90,000-student system.

A bill co-sponsored by 13 of the 21 Democratic state senators would require the college system to limit administrative spending by the central office.

On Monday, Bartolomeo questioned some of that spending while standing before a group of community college students in Meriden.

She cited $750,000 in pay raises for administrators, to match the percentage of raises given to unionized staff; $1.97 million paid to consultants to come up with a plan for the system’s future; and the planned spending of $60,000 on marketing to attract more students.

“These are some very important facts to be considered here,” Bartolomeo said.

Because of the administrative costs under Gray’s leadership, Bartolmeo said, she had “seen nothing yet that would lead me to have confidence in him.”

Over the last four years, the budget for the central office has grown by $5.5 million, the regional universities employ fewer full-time teaching faculty, and the top lawyer for state employee unions has raised concerns that the system’s Board of Regents is improperly outsourcing state employees’ jobs.