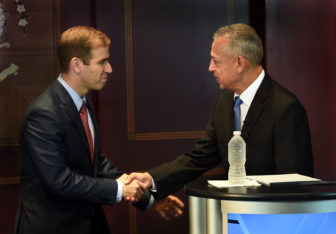 Hartford Mayor Pedro Segarra pointedly warned the ostensibly neutral Gov. Dannel P. Malloy on Wednesday that any effort to snub him in favor of the governor’s former aide, Luke A. Bronin, in the Democratic mayoral primary carries political risk.

Segarra told The Mirror after a debate with Bronin that he is popular among Latinos in Bridgeport, New Haven, Waterbury and other Connecticut cities, an increasingly important piece of the Democratic base.

“I think to the extent that anyone tries to unseat me, they would not look kindly on that individual or set of individuals,” Segarra said.

Segarra’s comments came after he repeatedly tossed zingers at the Democratic governor during a debate, possible payback for Malloy’s attending a public meeting on violence hosted Monday night by Bronin.

During a debate sponsored by The Hartford Courant and FoxCT, the mayor frequently tried to turn criticism by Bronin against the governor, suggesting fault for some of the city’s failings rested with the state.

“Fifty-two percent of our property is tax exempt and the state has not fulfilled its obligations,” Segarra said, responding to Bronin’s criticism of recent management problems in the Fire Department. “Let’s not blame the victim of this economic situation.”

Without mentioning the governor by name, Segarra also said the city was hobbled in its economic development efforts by an unresponsive Malloy.

Segarra said the Malloy administration negotiated a tax deal with United Technologies Corp., which recently announced it is relocating its corporate headquarters from Hartford to Farmington, without consulting with Hartford.

He also said the governor did not respond to his request to set up a meeting with Aetna officials to discuss the ramifications of the Hartford insurer’s merger with Humana of Louisville, Ky.

The governor of Kentucky arranged a meeting with Aetna officials and the mayor of Louisville, which led to assurances that jobs in Louisville would be preserved, Segarra said.

“It’s not what happened in Connecticut,” Segarra said, when asked later if he was saying the governor failed the city. “So I’m just trying to draw the differences. I’m not drawing a judgment on it, I’m just telling you what happened.”

Bronin said he found it strange that Segarra was blaming the governor for his inability to get a meeting with Aetna.

“The thing about leadership, you can’t wait for somebody else to take action, you’ve got to do it yourself,” Bronin said.

Devon Puglia, a spokesman for the governor, did not offer a point-by-point response to Segarra, but he suggested that the state was hardly a source of any management problems in Hartford.

“Over the last two budgets, Hartford will have received more than one billion dollars to support crime fighting and prevention, roads, schools, and more,” Puglia said. “We do not control how those dollars are administered.”

Bronin, 36, won the endorsement of the Democratic Town Committee last month, a setback to the 56-year-old mayor who is completing his first full term. Segarra took office in 2010 after the resignation of Eddie A. Perez, then won a full term in 2011.

Malloy denied Monday that his appearance at Bronin’s meeting, where he sat in the audience with his public safety commissioner but did not address the crowd, was a tacit endorsement of his former general counsel.

“That would be a misinterpretation,” Malloy said.