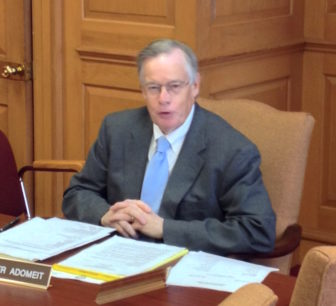 A state retirement panel dashed the hopes Thursday of six legislators who contend that any retired municipal workers should be allowed to collect a pension and be re-employed by another Connecticut municipality.

Technically the State Employees Retirement Commission voted 8-1 to reject the request of Marilynn Cruz-Aponte – who qualifies for a pension for New Britain city government service and earns a salary from Hartford’s Public Works Department.

Cruz-Aponte had asked the commission to allow her to collect the pension and the salary at the same time – something it had allowed once, but then later reversed itself on.

The commission’s written ruling was not immediately available Thursday afternoon.

Rep. Sean Scanlon, D-Guilford, was joined by five other state lawmakers – four Democrats and one Republican – in urging the commission to allow this practice.

The goal, Scanlon and others said, was not to intervene in any particular individual case, but rather to set a precedent that would ensure fairness for all municipal employees.

“It’s the right thing to do,” Scanlon, who attended Thursday morning’s commission meeting, said afterward. “It about all of them (municipal workers) together, Democrats and Republicans. They are all affected.”

Currently, retirees receiving a pension through the Municipal Employees Retirement System – which is administered by the state – cannot continue to do so if they go back to work more than 20 hours per week or 90 days per year in any other city or town that participates in the system. The General assembly enacted bills each of the last two years that would have ended that restriction, but they were vetoed by Gov. Dannel P. Malloy.

“I believe this bill would impose an undue burden on municipalities and is inconsistent with the purpose of the municipal retirement system, which is intended to provide assistance to our retirees and not current employees,” the governor wrote in his veto message earlier this summer.

But Scanlon and other legislators have argued this prohibition harms many communities that could save on training costs and otherwise benefit from the experience of veteran workers.

And while retirees from public safety positions are the most common examples cited, municipal retirees with backgrounds in public works, property assessment, tax collection and other posts could be valuable assets in another community besides the one from which they retired, legislators said.

Commission Chairman Peter Adomeit refused a request from Scanlon and five other legislators to address the commission at Thursday’s meeting. The other five were: Reps. Vincent J. Candelora of North Branford and Lonnie Reed, D-Branford; and Democratic Sens. Cathy Osten of Sprague, Ted Kennedy Jr. of Branford and Joseph Crisco of Orange.

And Adomeit said the legislators’ comments, if allowed, could have been seen as a violation of commission rules and as an improper intervention in Cruz-Aponte’s case. The chairman did allow legislators to send a letter to the commission to state their general concerns, which they did.

Cruz-Aponte receives a pension for her work in New Britain city government, but also received a salary from 2013 through early 2015 for serving as an assistant to the Hartford public works director. 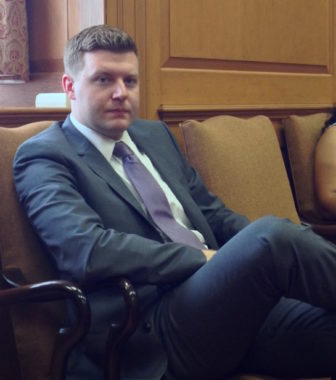 The commission originally determined Cruz-Aponte could receive both, but then reversed itself this past February.

Cruz-Aponte wrote to the commission in May and asked to have her case reconsidered again.

The commission discussed the Aponte-Cruz case Thursday in closed session, but offered no public comment before voting to reject her latest appeal.

Cruz-Aponte could not be reached for comment Thursday afternoon.

Scanlon added that, “I think we will bring the bill back next year, but after being vetoed in the last two sessions, I don’t know that the third time will be the charm. We have sort of reached our limit for helping these folks. We were saying to the commission, ‘Our hands at the legislature are tied, but yours are not.’”