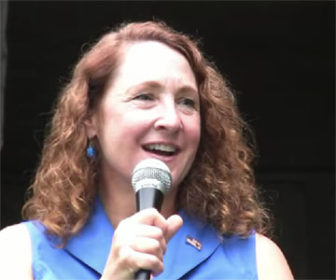 “This agreement is not ideal, but is the best available option,” Esty said in a statement. “I have listened to critics and constituents raise legitimate concerns – concerns that I believe will help guide the United States in our duty to enforce Iran’s compliance with the agreement and ensure that they meet not just the letter of the agreement but also its spirit.”

Esty was one of several dozen U.S. lawmakers who met with Israeli Prime Minister Benjamin Netanyahu, a strong opponent of the agreement, earlier this month.

Her support for the deal leaves Sen. Richard Blumenthal as the only undecided member of Connecticut’s all–Democratic congressional delegation when it comes to the Joint Comprehensive Plan of Action, the formal name of the agreement.

The agreement reached in July by Iran, Germany, the United States and the four other permanent members of the United Nations Security Council, requires Iran to halt its nuclear program in return for a removal of economic sanctions that have, among other things, hurt its ability to sell oil.

Opponents say Iran will continue to pursue its nuclear ambitions and use the money the end of sanctions would bring to strengthen its conventional arsenal and support terrorist groups.

But Esty said, “The JCPOA represents a real and significant improvement over current conditions.”

She also said the terms of the agreement “do not depend on trust but on cold, hard analysis and an extraordinary level of scientific and technical verification.”

Under a law passed earlier this year, Congress must vote on the agreement by mid-September.

The White House hopes to block GOP plans to approve a resolution of disapproval of the nuclear deal in the Senate, where Republicans will need 60 votes to end a likely Democratic filibuster of the resolution.

To date, only two Senate Democrats — Charles Schumer of New York and Robert Menendez of New Jersey —  say they oppose the agreement.

But there are still nearly 20 Senate Democrats, who, like Blumenthal, have not said how they will vote.

The resolution of disapproval is expected to pass the GOP-majority House.