For the interim, Ojakian can just say he’s ‘president’ 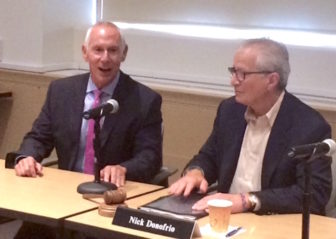 Mark Ojakian, left, and Nicholas M. Donofrio, chair of the governing board of the Connecticut State Colleges and Universities system

Mark Ojakian, the governor’s outgoing chief of staff and incoming leader of the state’s largest public college system, is an interim president, but he doesn’t have to say so when introducing himself.

“Notwithstanding the interim nature of this appointment, the President shall not be required to reference ‘interim’ in connection with his title as President of the CT Board of Regents,” Ojakian’s four-page contract reads.

Ojakian — who was named to lead the 90,000-student Connecticut State Colleges & Universities last week — has signed an employment agreement that guarantees him the job for two years.

The system’s governing board can terminate his contract by giving him 12 months’ notice or if there is cause — provisions his predecessor’s three-year contract also included.

Ojakian takes over as president after the tumultuous tenures and departures of the system’s previous two leaders.

His contract is largely identical to those of former presidents Gregory W. Gray and Robert A. Kennedy, with a few exceptions relating to his compensation. (Read those contracts here and here.)

Ojakian will be provided with a car to drive in place of the convertible he currently drives with custom “OJ” license tags, in reference to his nickname. The college system will also pay for his car insurance, vehicle repairs, health insurance and retirement benefits, just as his predecessors were.

Ojakian’s first day will be Sept. 28.

A spokesman for the system said that there is no separation agreement “at this time” for the outgoing president, whose contract guaranteed his employment through June but who has announced he will leave in December.