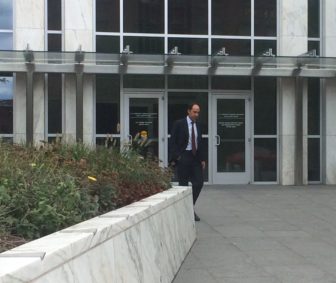 George Gallo leaving court after being sentenced in a campaign kickback case.

Connecticut’s former Republican state chairman, George Gallo, was sentenced Thursday in U.S. District Court in Hartford to a year and a day in prison for taking kickbacks on campaign mailings he arranged as chief of staff to the state legislature’s House GOP caucus.

Judge Vanessa L. Bryant told Gallo he abused his state employment by accepting $117,000 from a Florida direct mail company, a sum equal to 10 percent of the business Gallo sent the company in the 2008, 2010 and 2012 campaign cycles.

“It siphoned public resources for personal gain, and it is a betrayal of the public trust,” Bryant said.

The mailings all were provided to candidates who accepted public financing under the Citizens Election Program, a reform passed in 2005 in response to the bid-rigging scandal that forced Gov. John G. Rowland from office in July 2004.

The penalty the judge imposed is identical to the sentence given to Rowland in that case.

Gallo, who was ordered to begin his sentence on Nov. 30, would be eligible for release after about 10 months. He had pleaded guilty to one count of mail fraud.

Lawrence F. Cafero Jr. of Norwalk, who was the House GOP leader while Gallo was chief of staff, confronted him as early as 2008 about rumors of kickbacks, according to court documents. Gallo denied the rumors each time he was asked.

Cafero could not be reached Thursday.

A competing vendor raised the issue again in 2012, complaining that Gallo did not allow it to compete for the business.

Gallo had a similar arrangement with DMS, the Florida direct-mail company, while he was a campaign consultant in 2003 and 2004. His lawyer, Hubert Santos, said the arrangement was legal while Gallo was a private-sector employee. 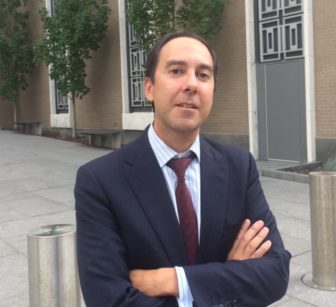 DMS discontinued the payments in 2005 after Gallo became the state GOP chairman under Gov. M. Jodi Rell. DMS already had a business relationship with the party.

But they resumed in 2007 after Gallo became the House GOP’s chief of staff, where his duties included candidate recruitment and overseeing the House Republican Campaign Committee. With the availability of public financing, there were fewer uncontested races and more business for companies like DMS.

Assistant U.S. Attorney Christopher Mattei told Bryant that public financing suddenly increased the value of being named a preferred vendor for a legislative caucus. The GOP candidates who agreed to use DMS were unaware Gallo was getting a 10 percent share of what they paid the company.

Gallo told Bryant that he reported the income on his taxes and initially did not see a problem, but the judge sharply challenged him, asking if he was aware of the state ethics code which bars state employees from using their jobs for financial gain.

“Did you ever read the state ethics code?” she asked. Gallo said he had.

Even though Gallo pleaded guilty, the judge said his acceptance of responsibility was “tepid.”

The judge was urged to be lenient in letters from prominent Republicans, including some former clients.

“George has one of the brightest political strategic minds that I know, and has always been one of the primary go-to sources for any Republican looking to run for office,” wrote Richard A. Moccia, the former mayor of Norwalk.

Gallo managed two of Moccia’s campaigns and advised him on two others.

“George Gallo is a good man who made a big mistake,” wrote Sen. Joe Markley, R-Southington. “I firmly believe he is too smart and too decent to make another, and that he is capable of doing far more good than he has done harm, if given the chance.”

“He is at his core a good man. I promise you that,” wrote Chris DePino, who hired Gallo as his top aide while GOP chairman during the Rowland administration.

DePino also was one of three speakers who addressed Bryant, seeking leniency.

Another was Gallo’s wife of 16 years, Lisa Tran Gallo, who said her husband’s presence has been important to her continuing treatment for breast cancer.

She stopped several several times to choke back tears.

She asked Bryant to impose a punishment other than prison.

But Bryant said a prison sentence was warranted, saying Gallo had contributed to the public’s skepticism of public institutions. She also ordered restitution of $117,000 to the victims: the campaigns off which Gallo made money.

Since those campaigns no longer exist, the money probably will be paid to the Citizens Election Program.