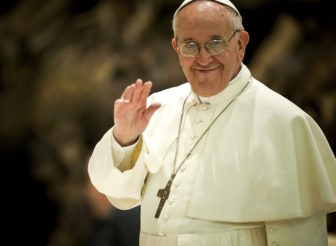 Washington – Rep. Rosa DeLauro has led an effort by congressional Democrats to urge Pope Francis to bring his social teachings to Congress when the pontiff makes his historic speech there on Sept. 24.

“Your powerful example of solidarity with the poor and the marginalized will undoubtedly help inform our current debates around major U.S. policy affecting Americans,” DeLauro, D-3rd District, said in a letter that was also signed by 91 other Democrats, including Connecticut Reps. John Larson, D-1st District; Joe Courtney, D-2nd District; and Elizabeth Esty, D-5th District.

The letter, sent to the Vatican in mid-August, is a mix of politics and piety. It  advised the pope that “his message of hope could not come at a more crucial time, in particular to those in our nation who are struggling on a minimum wage salary, or relying on public assistance to put food on the table.”

DeLauro, a champion of food stamps and other nutritional assistance to low-income people, and a strong supporter of an increase in the federal minimum wage, told the pope, “We find ourselves struggling with a broad range of social issues as a nation.”

The letter listed those issues – health care, the widening gap between rich and poor, climate change, immigration and increased racial tensions, “just to name a few.”

The letter, which has the support of many of the most liberal House Democrats, chided “some in the U.S. Congress (who) have refused to prioritize an increase in the minimum wage.”

This will be the first time a pope addresses a joint session of Congress.

Like many of his predecessors, Pope Francis has differed with the United States — and especially Republicans in Congress — on issues of war and social policy.

President Obama’s said the pope discussed “the poor, the marginalized and growing inequality” during a meeting in Rome in March, so it won’t be a surprise if he mentions the Democratic-friendly topics during his speech to Congress.

Pope Francis has also written a 184-page encyclical on climate change that he called “a new dialogue about how we are shaping the future of our planet,” especially the future of the world’s poorest, who are most affected by a changing climate. He called for industrialized nations to rein in their carbon emissions and other pollutants, a message that clashes with the position of many Republicans on the issue.

The pope has also spoken about immigration, again in a way congressional Republicans may not like – urging the United States to welcome immigrants.

With his trip to the United States still weeks away, the pope on Monday began to connect with some Americans with virtual meetings from the Vatican with a group of students from the Cristo Rey Jesuit High School in Chicago; with the Sacred Heart Church in McAllen, Tex.; and with a group of homeless men and women in Los Angeles.

On Tuesday, Pope Francis said he would allow Roman Catholic priests to absolve women who have had abortions if they seek forgiveness during the upcoming Holy Year of Mercy, which begins on Dec. 8.

Pope Francis’ visit to Washington, D.C., then to New York and Philadelphia, will come after a stop in Cuba.

He was invited to speak to Congress by House Speaker John Boehner, R-Ohio, who had tendered similar invitations to two of Pope Francis’ predecessors.

Boehner admitted the pope’s message may not completely jibe with GOP ideology.

“He’s got some positions that are a little controversial, but — it’s the pope!” he said.

The Pew Research Center estimates that one-third of members of the 114th Congress identify as Catholics.

Each lawmaker has been given one ticket to invite a guest.

Larson has invited his wife to the pope’s speech. Other members of the Connecticut congressional delegation have not made up their minds about whom to invite. Some, including Sen. Chris Murphy, say they will announce their invitees at a later date.

The State Department has informed lawmakers of protocol for meeting the pope. They are advised to wear dark colors. Women should wear sleeves that cover the elbows and hems should fall below the knees.

No one is supposed to approach the pope without an invitational gesture, the State Department says.

If the pope approaches you, one should either shake his hand, or if you are Catholic and want to do so, kiss the pope’s ring — worn on his right hand.

The pontiff also will appear at a White House welcoming ceremony, and he will celebrate mass at the Catholic basilica in Washington.