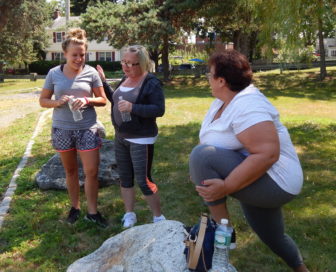 Cindy, center, jokes with Elizabeth Strange, who co-leads the fitness group, and Luz Esquilin during a walk at a Manchester park.

Manchester – The fitness group walked in loops on the path with 51-year-old member Cindy as its unofficial cheerleader.

“You got flames coming out of your feet, you’re going so fast!” she yelled to one walker, who had charged ahead. She gushed over the new shoes a young man was wearing, and teased a twenty-something group leader about being too young to know who fitness guru Richard Simmons was.

“She helps me with my mental health and I teach her about the old fogey programs,” Cindy joked.

This was not a typical exercise group; it’s run by a mental health agency and part of a statewide effort to bring together mental and physical health care for thousands of people with serious mental illness, chronic medical conditions and high health care costs.

As part of it, 15 local mental health agencies now serve as “behavioral health homes,” designed to play a larger role in their clients’ overall health. That means coordinating their medical and behavioral health care, offering wellness programs, tracking things like diabetes and blood pressure, and addressing barriers – such as past experiences with trauma – that can keep clients from getting the care they need.

“This really involves a bit of a paradigm shift,” said Cheryl Stockford, an official at the state Department of Mental Health and Addiction Services leading the initiative.

Behavioral health homes draw on two concepts that are gaining momentum in health care – the medical “home,” in which patients have a health care provider who takes on a larger role in coordinating their care, and bringing together primary care and behavioral health.

But most of those efforts center on primary care practices, either as the site of patients’ medical home or where mental health services are delivered. The premise behind behavioral health homes is that, for some people with serious mental illness, it makes more sense to take the opposite approach – using the behavioral health treatment system as people’s home base and coordinating medical care from there.

(Despite what the name might imply, behavioral health homes are not residential programs. They’re patients’ home bases for care.)

“What the data showed, and why we went that direction, is that for people who have severe and persistent mental illness, their longest-term helping relationship tends to be with their behavioral health provider, so there’s more trust established,” said Colleen Harrington, director of the managed services division at the Department of Mental Health and Addiction Services.

People who work in behavioral health often note that research indicates that people with serious mental illness die 10 to 25 years earlier than the general population. Experts cite a host of reasons – higher rates of smoking and other unhealthy behaviors, side effects of psychiatric medications, challenges associated with poverty – but among them is less access to medical care. 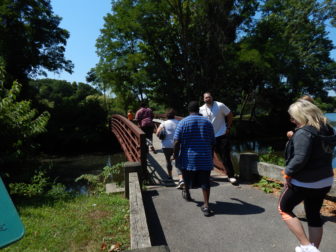 For Cindy, being part of a fitness group would have seemed unthinkable not long ago.

She struggled to trust people after enduring years of abuse, first as a child, then from her former husband. Her therapist tried for years to convince her to attend groups, but she never felt comfortable. She barely left the house.

She had panic attacks so severe she was in the hospital multiple times a month. In addition to her bipolar and post-traumatic stress disorders, she has asthma, a nerve disease, and blood sugar levels that put her at risk of diabetes. She survived cancer.

But getting medical care has been challenging. Some doctors dismissed her complaints of pain because she had PTSD (the cause turned out to be tumors, she said). She didn’t always take her medication.

The program helped change that. It started with a call from Elizabeth Strange – a behavioral health home specialist and the group leader Cindy teased about being too young to identify Richard Simmons – that convinced her to try out a group.

“She let me talk to her and she heard what I was saying,” said Cindy, who agreed to speak about her experiences as long as her last name not be used. “And she said, ‘Just try it.’ The first time we met, it was a connection.”

She cried during the first groups she attended.

But she stuck with it. She joined a stress management group and plans to join one on nutrition. The program helped her find a cardiologist and track her blood pressure.

William Domijan, a peer support specialist who co-leads the fitness group, took her to the grocery store and helped her learn to find healthier foods. In the past, taking the time to pick out the right foods seemed impossible.

“Going to the grocery store for somebody with PTSD and you’re afraid of things, you don’t want to,” Cindy said. “You just want to get what you need and go home.”

She lost 11 pounds and has only been to the hospital once since joining the program earlier this year, down from two or three times a month. She credits it with giving her two things she hasn’t had for years: stability and friends.

Connecticut’s behavioral health homes, which began operating earlier this year, are intended for people with severe, persistent mental illness and at least one chronic medical condition, who incur at least $10,000 in Medicaid claims per year. Stockford estimates up to 17,000 people could qualify.

The program is a demonstration project, meant to test the hypothesis that those involved would get better care by using behavioral health as the home base for care. Agencies must measure a wide range of outcomes, including those related to reducing preventable hospitalizations, homelessness, client satisfaction and how well clients’ chronic conditions are controlled.

The federal health law gave states a new funding option for programs like the behavioral health homes. For the first two years, Connecticut can receive federal reimbursement for 90 percent of the Medicaid expenses incurred in the program, and Harrington said that officials expect that once that expires, the program will be cost-neutral. The state is spending $10 million to start up the behavioral health homes, largely for the mental health agencies to hire additional staff. 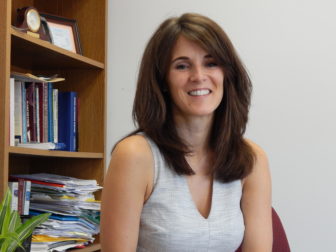 At Community Health Resources, the treatment provider that runs Cindy’s program, many of the behavioral health home clients had primary care providers, but they were “disengaged,” said Courtney Sheehan, senior program director at the agency.

In some cases, people weren’t following through with referrals or screenings. They might not have transportation to get to the facility or family to help take them home after a procedure.

Having a history of trauma – which is widespread among DMHAS clients – can add difficulties to medical care, experts say.

Some types of care, like dental care, mammograms and colonoscopies, are intimate in ways that can be uncomfortable for people who experienced violence, Sheehan said. Having choice and control can be particularly important for trauma survivors, she said.

“The power differentials that occur in medical interactions are to be considered,” Sheehan said. “Thinking about that and giving patients as much information and control over those situations, I think, is really important.”

Some of the work involves what Sheehan calls “connecting the dots,” addressing issues that get in the way of a person’s health. If a client has anxiety about swallowing pills, they look for a liquid version. Better coordination between a psychiatrist and primary care provider can cut down on the number of blood tests a patient needs.

“A lot of people don’t have them,” she said. “Just having that can change their whole health outcome more than anything else, I think.” 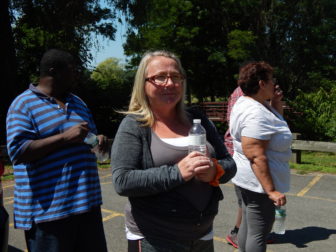 Cindy’s one recent hospital visit came after a bee sting; she’s allergic. A nurse from the program drove behind the ambulance and stayed with her while she got care.

And Cindy learned from it.

“It’s hard when you go to the doctors when you have PTSD or any kind of mental issue,” she said. “Sometimes the way you’re treated, you would think it’s your fault.”

This time, Cindy said, the nurse was upset at how she was being treated and spoke to a supervisor.

“For once, in years, I had somebody with me and it wasn’t me making them treat me that way, it was just the doctor, maybe he was having a bad day, but that’s not my fault,” Cindy said.

She had another panic attack recently in a store, when she heard a man yelling and swearing at his wife. She called Strange. “She answered the phone, helped me with my breathing,” Cindy said. “If I wasn’t able to get ahold of her, I probably would’ve passed out and been in the hospital.”

The fitness group is about more than walking, she said. The group members help each other and work on coping skills. They bond. Cindy calls them her family.

On a recent walk at the Union Pond boat launch in Manchester, she was animated and cheerful, yelling encouragement to other group members and gabbing with Luz Esquilin, a friend she met through the program, who Cindy now calls her security blanket.

They passed the pond, where ducks had gathered. Cindy said she felt bad she didn’t bring them food.

I’ll bring you bread next time, she called to them.

Then she added, “I’ll bring wheat bread! It’s healthier for ya!”

Read the previous story: In some primary care offices: The social worker will see you now.