In some primary care offices: The social worker will see you now 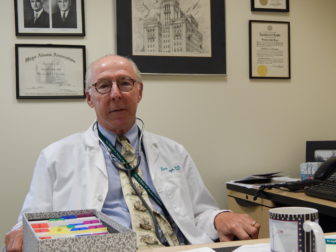 COLCHESTER – Until recently, when Dr. Stephen Kaye thought one of his primary care patients could use mental health help, he’d refer them to a therapist. But the odds that the patient would go weren’t good.

Some didn’t call for an appointment. Some found the provider didn’t take insurance or have appointments anytime soon.

“A lot of people were dropping through the loops,” said Victoria Samolis, the office manager at the Backus Family Health Center. “When they come in for their follow-up visit in three months, we find out they’ve never gotten any counseling.”

That changed in March, when the office added a social worker, Janine Fonfara, to its staff. Now if Kaye thinks a patient could use assistance, he walks down the hall and asks Fonfara to come to the exam room. She introduces herself to the patient and offers to work with them, usually three or four sessions. Nearly all take her up on it.

“A lot of these people never would’ve gotten to a counselor if we didn’t have this system,” Kaye said. He called it “probably the most positive innovation I’ve seen” in 40 years of medical practice.

The change was part of an effort by the practice’s parent company, Hartford HealthCare, to address a longstanding problem in health care: although mental health and substance abuse issues are often linked with physical health, they’re usually treated wholly separately from medical care. And that means many patients fall through the cracks.

If a primary care doctor tells a patient to see a cardiologist to address high blood pressure or to go to a dermatologist because of a concerning mole, the patient is almost certain to make an appointment, noted James F. O’Dea, vice president of operations for Hartford HealthCare’s Behavioral Health Network. But if a doctor suggests that a patient seek help for depression or substance abuse?

“Every patient nods their head and says, ‘I’ll make a call,’” O’Dea said. “Here’s what we know: Less than 25 percent of those patients make the call.”

The idea of better integrating primary care and behavioral health has been talked about for years by health care experts as a way to both improve health outcomes and save money.

Actually bringing the two fields together has lagged, stymied by a host of barriers that include differences in the way the two fields operate, differing payment systems, a lack of funding for the initiatives, and concerns about sharing information between behavioral health and medical providers.

But some experts say there appears to be momentum toward integration.

“This is definitely one of the high-priority issues for health care providers and systems and states right now,” said Dr. Pamela Riley, assistant vice president for delivery system reform at The Commonwealth Fund. “We’re seeing a lot more interest in this.”

Factors driving it include the expansion of insurance – including mental health coverage – under the federal health law and the growth of payment models that tie health care providers’ compensation to care quality and their ability to control costs, Riley said.

Patients with behavioral health needs tend to have higher medical costs and rates of hospitalization. And untreated mental health issues can influence people’s ability to address other chronic conditions, like diabetes and heart disease.

“I think providers are realizing that in order to really meet their goals in terms of improving quality and containing costs and improving their bottom line, they’re going to have to address this,” Riley said. 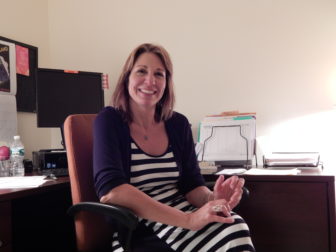 Janine Fonfara in her office, designed to be more clinical than a traditional therapist’s office.

There’s a wide range of models for integrating primary care and behavioral health – among them having psychiatrists consult with primary care providers and help out with patients who have more serious needs, or bringing primary care services to mental health agencies.

But making it work can be more complicated than simply locating a mental health clinician in a primary care office, said Polly Kurtz, executive director of the Collaborative Family Healthcare Association.

“We see a lot of models where a behavioral health [clinic] will embed a behavioral health provider in a primary care practice, but we’ll still have a whole different set of electronic medical records. They keep their notes somewhere else, their billing happens somewhere else, there’s not that shared record,” she said. “I think that continues to create the fragmentation that occurs.”

But Kurtz said even that fragmentation can be overcome if the providers buy into the idea of working together – something that can make the difference between an approach’s working or failing.

Over the past year, Hartford HealthCare has been evaluating different approaches in eight primary care practices that are part of the system’s Hartford HealthCare Medical Group. The health system is planning to expand the model in use in Kaye’s practice – using psychiatric social workers to provide short-term therapy as part of the primary care team – to six more practices this fiscal year, using grant funding, O’Dea said.

The model can work in the current payment system, O’Dea said, but he anticipates it will have more payoff as the health care system moves toward paying providers based on patient outcomes and costs.

“We see behavioral health as absolutely critical in the value equation,” he said. “If you provide really effective behavioral health services to those 20 percent of the people who are consuming a disproportionate amount of the resources, you can really begin to bend the cost curve.” 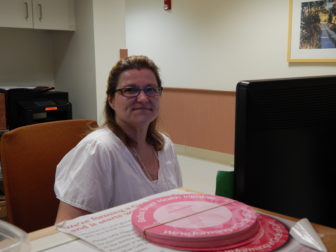 Victoria Samolis has noticed a difference in patients.

For Fonfara, joining a primary care practice has been an adjustment. She’s not there as a therapist in the way she traditionally practiced; she answers to the primary care provider and provides short-term counseling. Even her office was designed to look more clinical (it has two easy chairs and dim lamp-lighting, but unlike a more traditional therapist’s office, she noted, it has no carpeting).

She gets pulled into an exam room a few times a day to meet with a patient for the first time. The reasons vary: depression, anxiety, substance abuse, grief, life stressors like job changes or family problems. The therapy she provides is focused on addressing the problem that brought the patient to her.

If it turns out the patient needs longer-term therapy, she connects them with a local provider.

And Fonfara considers the adjustment worthwhile. She said patients are grateful they can receive services in a primary care office.

“They might not pull their car in front of a psychiatrist’s office, or a therapist’s office, but they’re here at their primary care doctor’s office,” she said.

Samolis, the office manager, can see a difference. She’s noticed patients who often looked sad or concerned now leaving the office with a different demeanor. It helps, she said, that the care is part of a doctor’s office where they already have a relationship with the staff.

“They’re not going to a new office. They’re not being judged. They’re staying within their home and already have relationships built here,” she said.

And, she says, it’s a relief to be able to offer immediate help to patients who need it.

Soon after Fonfara started, a woman came in crying, in crisis. She’d been off her medications and wanted to go back on.

In the past, they would have taken her to an exam room and called an ambulance to take her to the hospital to be evaluated, Samolis said.

But that day, she had another idea: “Janine’s here! Let’s go get her!”

Fonfara spoke with the patient for 15 to 20 minutes, and connected her to other resources. And she walked out smiling, Samolis said.