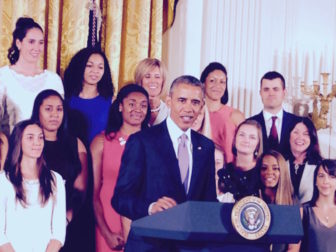 President Barack Obama sings the praises of the national champion University of Connecticut women’s basketball team at the White House.

WASHINGTON – In honoring the UConn women’s basketball team Tuesday, President Obama joked that team members had been at the White House so regularly it was “almost like the annual Christmas tree lighting.”

“They’ve visited so much they are now certified to give White House tours,” the president said.

Obama honored the team Tuesday for their third straight national title. The UConn women won the 2015 NCAA championship last spring in Tampa with a 63-53 win over Notre Dame.

It was the team’s 10th title, but Obama ribbed that the streak could come to an end.

“I don’t want to jinx it, but no team has won four (championships) in a row,” Obama said.

Players like Breanna Stewart and Moriah Jefferson, who’ve been playing, and winning, since they’ve been freshman, have a chance at a fourth trophy – and another trip to the White House.

This visit to Washington was short. The Huskies arrived in the morning and were heading back to Connecticut in the afternoon.

But there was enough time for the team to be honored by the president in the stately Palm Room of the White House and to attend a reception to celebrate its latest triumph.

The visit continues a presidential tradition of honoring winning sports teams for their efforts to give back to their communities.

Obama said the Huskies are examples to young women, including his two “tall and beautiful” daughters.

“He finally got to meet the president, what a spectacular thing,’” Larson said.

“Every time we come here is different,” he said, pointing out that for some team members, it was a first visit.

Auriemma said he could continue to coach the women’s team “as long as I’m healthy enough to do so.” As far as the possibility of losing the championship? Auriemma said it’s always a consideration at the start of a season.

“But we don’t allow ourselves to think that way,” he said.