Washington – His opponents may make it a campaign issue, and he’s drawn fire from some constituents for the move, but Sen. Richard Blumenthal’s vote on the Iran nuclear deal hasn’t caused much of a backlash, analysts say.

Blumenthal, who is Jewish, was lobbied hard by national groups who spent hundreds of thousands of dollars on television advertising in Connecticut to influence his vote on the Iran deal — in both opposition and support.

All other members of the Connecticut congressional delegation supported the agreement. But Blumenthal remained undecided for weeks, becoming in the end a key swing vote.

In the end, Blumenthal voted with 41 other Democrats to block a GOP-sponsored resolution of disapproval of the agreement, sparing President Obama the international embarrassment of having to use his veto. Under the deal, known officially as the Joint Comprehensive Plan of Action, Iran would put its nuclear program on hold in return for the easing of economic sanctions.

Other Jewish lawmakers with large Jewish constituencies, including Sens. Charles Schumer, D-N.Y., and Ben Cardin, D-Md., broke with the White House by opposing the deal.

Blumenthal said it was a “gut-wrenching and difficult” choice.

“At the end of the day, it was a decision made on the basis of conscience and conviction,” he said.

The American Israel Public Affairs Committee was on the front lines of opposition to the pact, saying it would strengthen Iran and put Israel at risk. Former Sen. Joe Lieberman, whom Blumenthal succeeded, is a high-profile national critic of the agreement.

But Blumenthal did not face the same pressures from Jewish constituents on the Iran agreement that other Democrats did.

Unlike its counterpart in other states, including New York and New Jersey, the Jewish Federation Association of Connecticut, (JFACT) did not take a position on the Iran pact.

“There was not a clear consensus among the board,” said JFACT Executive Director Bob Fishman.

JFACT is an umbrella group for nine Connecticut Jewish federations, and a number of Jewish community centers, social service organizations and nursing homes. It lobbies for legislation that is of interest to Connecticut’s 130,000-member Jewish community.

Fishman said only two of its nine federations, the one in Hartford and the one in New Haven, considered taking a stance on the Iran deal. The New Haven federation discussed it at length, and could not come to an agreement, Fishman said.

The Hartford group did, after much deliberation. It issued a statement that was critical of the Iran deal and concluded “the agreement does not address Iran’s promotion of terrorism in the Middle East, or its commitment to destroy Israel.”

With no consensus among Connecticut’s Jewish groups, Fishman said JFACT did not get involved in the debate.

Fishman said it helped that Blumenthal was “very clear in his rationale.” He also said he does not “feel a groundswell” of animosity toward Blumenthal because Connecticut Jews are split about the agreement.

“And the majority of people who opposed the agreement would not say ‘because he voted the way he did, I will not vote for him again,” Fishman said, citing deep support for the senator on other issues.

Blumenthal said he spoke with many constituents about the Iran pact during Congress’s August break.

“I listened to a great many experts and officials, including the president,” Blumenthal said. “But most importantly to the people.” Local AIPAC members tried to lobby Blumenthal, including Don Gershman, chair of the Greater Hartford AIPAC Council.

Gershman declined to discuss his meetings with Blumenthal. He said he did not know how Blumenthal’s votes on the Iran deal would impact his support among AIPAC members in the state. 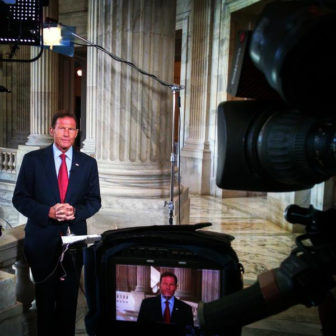 Sen. Richard Blumenthal explaining his vote on the Iran deal in front of a camera from MSNBC.

University of Connecticut political science professor Ron Schurin said he did not believe it would be significant.

“I get the sense that the AIPAC leadership is not representative of its members,” Schurin said. “They  are not universally opposed to the deal.”

Gary Rose, head of the political science department at Sacred Heart University, said Connecticut voters are too loyal to the Democratic Party, and to President Obama, who won the state by wide margins, to criticize Blumenthal for his stance on the Iran deal.

“First and foremost, this is a state that has been moving in a liberal direction for many years,” Rose said. “And its a very Democratic state. It’s a state that’s in Obama’s corner.”

Rose also said Blumenthal, who served for years as the state’s attorney general before his election to the Senate, is a “household name” who has broad support.

The vote could have some minimal impact, said Jennifer Duffy of the Cook Political Report.

“It may hurt with some of his Jewish donors and constituents because Israel is so opposed to the deal,” she said.

Even so, the Cook Political report ranks Blumenthal’s race as “Solid Democrat.”

Zero tolerance for a nuclear Iran

When he finally announced his decision on the Iran deal, Blumenthal also announced that he would be introducing legislation with Cardin, a fellow Democrat who opposed the agreement, that would toughen “snap-back” policies regarding the re-implementation of U.S. economic sanctions on Iran if it violated the agreement.

The Blumenthal-Cardin bill would also enhance security assistance to Israel — something sought by the Jewish Federation of Greater Hartford — and contain other measures aimed at making it more difficult for Iran to renege on the deal.

“Specifically, it is by statute a zero-tolerance for a nuclear-armed Iran,” Blumenthal said.

Blumenthal said he’ll introduced his bill within a week. But it’s not likely to move through Congress without GOP support, and that will be tough right now after the bitter bipartisan fight over the Iran deal. Republicans do, however, support boosting U.S. aid to Israel.

Schurin said one reason Blumenthal sponsored the legislation was to “take the steam out of some of those who are very angry about the vote.”

The UConn professor said there may be another reason for the bill — to send a message to Iran’s leaders.

“Once the Obama administration is gone, it may signal that there will be some people in Congress who will look closely that Iran abides by the terms of the agreement,” Schurin said.

Schurin does not believe Blumenthal will lose much popularity over support of the Iran pact. Polls taken before the decisive Senate votes put the senator’s job approval rating at 64 percent. But Blumenthal’s political opponents are not likely to let the issue pass.

August Wolf, a Republican from Stamford, kicked off his campaign against Blumenthal with a cable TV ad focused on whether the senator would support the Iran deal.

“We can’t trust the Iranian terrorist regime with nuclear weapons,” Wolf says in the ad.

After Blumenthal announced his decision on the pact, Wolf called the senator “a complete Washington Weasel.” Wolf is not likely to let the issue drop.

Meanwhile, economist and CNBC host Larry Kudlow has said he would also challenge Blumenthal if he voted in favor of the Iran deal.

Schurin said it is unlikeLY Kudlow will run because “he would have to give up his TV spot.”

A spokeswoman for Kudlow said he is still making up his mind.

“It’s hard to know whether to take Larry Kudlow seriously,” Duffy said. “But if he (runs), Blumenthal could end up with a more serious race than he ought to have.”