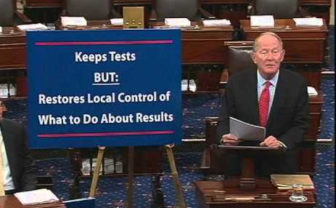 Sen. Lamar Alexander, R-Tenn., on the Senate floor during the debate on the Every Child Achieves bill.

Washington — Efforts to fashion  a new federal education bill have created a big divide between civil rights organizations and teachers unions – and between many Connecticut educators and Sen. Chris Murphy, who has been active in trying to shape the legislation.

The rift is over how much accountability there should be in the “Every Child Achieves Act.” The bill would replace the Bush-era “No Child Left Behind Act” that in 2002 established a larger federal role in the nation’s public schools and tied federal dollars to school performance.

Murphy and civil rights groups are dissatisfied with a bill the Senate approved in July. It would leave in place an annual testing schedule and require reporting on the performance of vulnerable groups of students, but would shift to states and local districts greater control over the role of tests in assessing the performance of schools, teachers and students.

The bill would not sanction schools that don’t address the problems of vulnerable populations — poor and minority children and disabled students – something that mobilized the opposition of civil rights groups and prompted Murphy to try to strengthen the legislation.

“The principle of accountability is not negotiable to us,” said Leslie Proll, director of the Washington office of the NAACP Legal Defense and Educational Fund. “This was the raison d’etre of the original act. Educational systems must be held responsible for narrowing and eliminating gaps in opportunity and achievement for students of color.”

In the Senate bill, states must include tests in their accountability systems, but would be able to determine the weight of those tests. They would also be required to use graduation rates and English proficiency in determining the performance of a school. But they would also be allowed to include other measures of student and school performance in their accountability systems.

Murphy’s amendment, which failed to garner enough Senate votes to pass, would have required schools that underperform for several years to come up with a plan to fix their problems.

A House-passed education bill includes even fewer accountability standards. It would allow federal education dollars to follow students to the public schools of their choice and allow parents to opt their children out of standardized tests.

Both bills would bar the federal government from setting academic standards, such as the Common Core curriculum.

Negotiators in the House and Senate hope to craft a final bill and send it to President Obama by the end of the year.

They will have to bridge huge gaps between the House and Senate bills, a process that is made more difficult by the competing interests hoping to shape the final bill.

Sheila Cohen, president of the Connecticut Education Association, said, “All punitive measures must be deleted from what comes out in a final bill.”

“Doing anything punitive in nature eradicates what goodness is going to come out of this bill,” Cohen said.

That stance puts the CEA, and its parent the National Education Association, at odds with Murphy, a member of the Senate Health, Education, Labor and Pensions Committee, and with the nation’s civil rights groups. They civil rights groups want a tougher bill with more accountability.

Meanwhile, Cohen, who heads an organization that has 43,000 members in Connecticut, also wants a final bill that will eliminate yearly testing to determine a school’s progress.

“Taking a test every year… does not close the achievement gap,” she said.

Another issue that divides teachers unions like the CEA and civil rights groups is whether parents have the right to opt their children out of tests.

Cohen said parents have a right to do so. A coalition of civil rights groups that include the Leadership Conference on Civil and Human Rights, the NAACP, the National Council of La Raza, the National Disability Rights Network and the National Urban League, said allowing students to opt out of tests “would sabotage important data and rob us of the right to know how our students are faring.”

But he said no federal education bill will be able to solve all of the problems minority children face in their efforts to get a good education.

“It will never be a perfect system,” he said.

The Every Child Achieves Act would be the latest of many reauthorizations of the Elementary and Secondary Education Act of 1965, one of President Lyndon Johnson’s “Great Society” reforms.

The ESEA provided, for the first time, federal aid to schools, mostly those with low-income and minority students, to try to level the educational playing field between rich school districts and poor ones and to shrink a yawning achievement gap. The bill was considered part of Johnson’s War on Poverty.

Murphy considers it a civil rights bill too.

He said he “worked very hard with the teachers union to find common ground.” Cohen said she traveled to Washington earlier this year to meet with Murphy and try to bridge differences. But they remain.

“The items that I mentioned will not be compromised,” Cohen said. “I spoke personally with Senator Murphy, and we understand there is a difference in our views.”

Yet Murphy is optimistic a final bill can be negotiated and that it will contain enough accountability requirements to win his vote – and those of other Senate Democrats.

He said he’s pleased the American Federation of Teachers has been less critical than the NEA of his efforts to make teachers and schools more accountable.

“I think that shows there’s some room to talk,” he said.

But the NEA and its state affiliates are lobbying for a less restrictive bill. The NEA has spent $1.2 million lobbying Congress and the Obama administration during the first six months of 2015.

Republican lawmakers will also press for flexibility and minimize federal mandates in a final bill.

On the other hand, President Obama said he would not sign a bill into law that does not take care of the concerns of the civil rights groups.

“I don’t know why Republicans would allow the existing law to prevail,” he said. No Child Left Behind had been sharply criticized by teachers and governors of all states who have sought waivers from its mandates.

“The status quo puts all the power in the Obama administration through the waiver process,” Murphy said. “Republicans should want to end that.”