USDA tells states to process food stamps again, but no guarantee of benefits

But that doesn’t assure that anyone will receive them at the beginning of the month.

Last week, with the threat of a government shutdown looming, the U.S. Department of Agriculture told Connecticut’s DSS and food stamp agencies in other states to stop processing Supplemental Nutrition Assistance Program (SNAP) payments. If a congressional stalemate over the budget bill is not broken, there will be no funds to distribute.

In a new letter Thursday, the USDA told the states to resume processing the payments, “to ensure that October benefits can be issued on a timely basis.”

“However, should Congress fail to act, USDA would have limited resources to finance October SNAP benefits and would be required by law to ensure that USDA does not incur obligations for which funding is not available,” the USDA letter said.

That means states will be allowed to put benefits on EBT cards that food stamps recipients use to shop for food, but those benefits will be frozen if the government shuts down. Grocery stores and other food outlets will not be able to honor them. There are about 430,000 food stamp recipients in Connecticut.

“The upshot — while Connecticut and 49 other states and US Territories are now cleared to send October SNAP benefit information to our EBT vendor systems, we don’t know yet when the benefits will actually be available for the clients to access at supermarkets, groceries, farmers’ markets and other participating EBT retailers,” said a notice from the Connecticut DSS to food stamp advocates. “That depends on Congress and how [the USDA’s Food and Nutrition Service agency] responds over the coming days and weeks.”

The USDA sent a question-and-answer fact sheet to food stamp recipients and retailers late Thursday that sought to explain the situation.

It says that if Congress passes a budget after Oct. 1 “it will take a few days to bring retailers back online so they can begin accepting SNAP EBT cards again.” 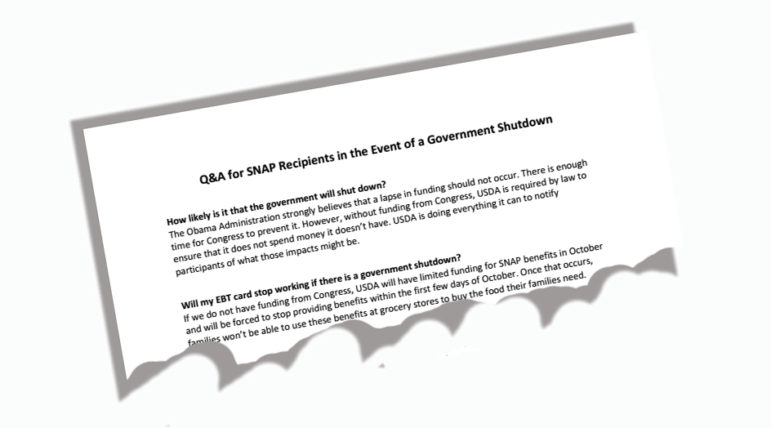 It also says that if there’s a shutdown, beneficiaries would be blocked from using leftover September benefits. It urged food stamp recipients to stock up on food now, even as it conceded some food items are perishable and won’t last very long.

The USDA’s urging that food stamp recipients flock to the supermarket is a problem for Stan Sorkin, president of the Connecticut Food Association.

“It puts [stores] in a bad situation because there will be a run on food,” he said.

Congress is running out of time to approve a budget for fiscal year 2016 or even to approve a short term funding bill, called a continuing resolution. The bill is stymied by the insistence of conservative Republicans that Planned Parenthood be defunded in the legislation.

The Anti-deficiency Act prohibits federal agencies from obligations or expending federal funds without an appropriation.

The last time the government shut down, for 16 days in 2013, SNAP benefits continued because there was enough money left in a stimulus bill fund to keep the program running. The USDA says that’s not the case now.

On Thursday, Senate Democrats blocked a Planned Parenthood defunding bill. Since it’s clear a defunding bill can’t pass the Senate, there were talks late Thursday about a deal that would allow the federal government to operate until the end of the year.

Lucy Nolan, director of End Hunger Connecticut!, said the USDA’s change in policy regarding food is an indication there’s optimism the government will not shut down.

“I do feel they are confident about a short-term funding bill,” Nolan said.

The USDA says food insecurity has decreased as the economy has come out of recession.

But a recent report said 14 percent of the nation’s households, or about 17 million households, are still having a difficult time at some time during the year providing enough food for all family members – even when SNAP benefits are available.

“I urge you to review the findings of the USDA survey to get a clearer picture of what is at stake for families in your communities,” she told fellow lawmakers.