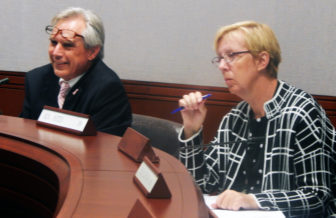 Testifying before a legislative panel about the 95 departmental layoffs ordered by the governor this past summer, Labor Commissioner Sharon T. Palmer expressed fears that her reduced departmental staff will struggle to provide services during the peak demand period this winter.

But speaking in general about the new plan to scale back departmental services to adjust for the layoffs, Palmer said “I think it will work and work well.”

The department currently operates 18 job centers across the state, providing a variety of training, job search and other assistance programs. Twelve of those centers are deemed “full service centers” and are staffed by state employees, while six “affiliate centers” are staffed with privately contracted workers and provide fewer services.

The administration announced in July that 95 of the department’s workers would be laid off because of shrinking federal assistance. About 700 of the department’s 800 workers are funded with federal dollars – aid which is reduced as Connecticut’s unemployment rate improves.

At the same time, the administration also indicated that five or six full service job centers also would close, and one of the department’s two call centers also would be shut down. The announcements prompted objections from state employee labor unions and from legislators whose districts include the affected centers.

“We needed to take more dramatic actions to address this,” Malloy’s budget chief Benjamin Barnes explained Monday. Since that initial announcement, the administration has found new assignments in other agencies for 60 of the 95 workers who received pink slips. He told the members of the legislature’s Labor and Public Employees Committee that he hopes to find placements for the rest soon.

Critics noted that many of the centers targeted for closure were in urban areas, where unemployment was highest.

Palmer and Barnes announced Monday that no centers would close. Instead, six facilities –those in Enfield, Meriden, New Britain, Norwich, Torrington and Windham – instead would be restructured from full service to affiliate centers next month. 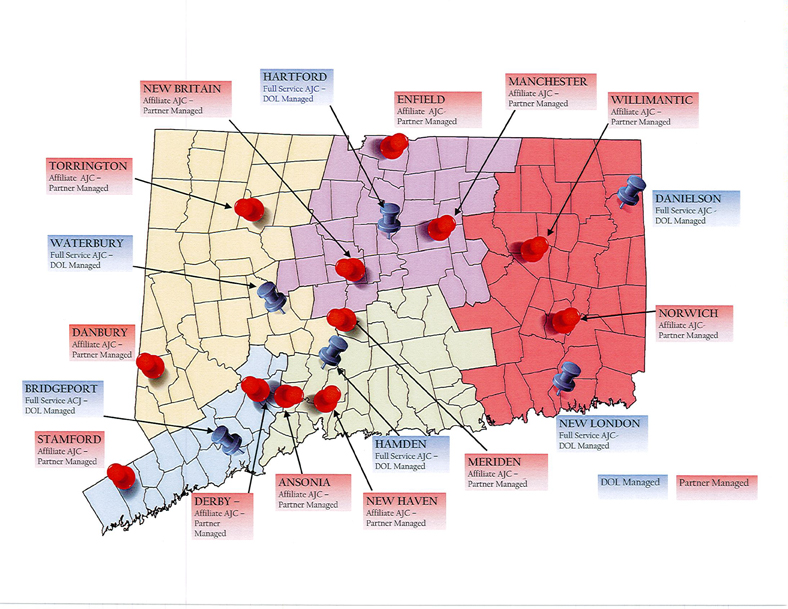 This map shows how the Department of Labor expects to divide operation of its centers between the state and affiliate operators next month.

“There’s a heavy demand for services in those offices,” Palmer said, adding this is an attempt to compromise and preserve as many services as possible.

But the commissioner also acknowledged some residents may have to travel farther than they currently do to get access to a particular employment service or program.

Eastern Connecticut was a particular concern because of the many rural communities and a lack of public transportation. Palmer said there will be full centers in New London and Killingly to complement the affiliate centers in Windham and Norwich.

“That, quite frankly, was the best we could do in eastern Connecticut,” she said.

Palmer also conceded she has “significant concerns” about how her department, which already struggles to meet demand during busy times, will fare this winter. The department’s “high season” runs from January through March, she said. That’s when construction, seasonal retail workers and others need other employment.

“I can’t tell you that we’ve solved how we’re going to do that with less personnel, but it’s on our radar,” she added.

Some legislators criticized the Malloy administration for not announcing the layoffs and planned job center closures until July – one month after the regular 2015 legislative session had ended.

Palmer said it really wasn’t clear that layoffs were necessary until late spring, but Sen. Cathy Osten, D-Sprague, whose district includes Norwich, said there still was time to inform legislators during the session.

“I’m OK with receiving bad news,” she said. “I prefer to see the bad news I’m receiving up front.”

Rep. Peter Tercyak, D-New Britain, who co-chairs the committee, said he was pleased the administration had modified its plans to avoid any full closures. But he also urged Barnes and Palmer to inform legislators immediately of the department struggles to provide any vital services this winter.

For example, Tercyak said, an unemployed resident waiting to hear if an application for unemployment benefits is granted already is under great stress without having to face a long wait. “For the unemployed, who were living paycheck-to-paycheck, waiting for the decision is scary,” he said.

State employee union leaders also testified at Monday’s hearing, predicting the modified plan would fail to meet the need for services in many cities.

“Turning a bottle neck into a funnel neck is simply unacceptable,” said Salvatore Luciano, executive director of Council 4 of the American Federation of State, County and Municipal Employees. “… They will try. And I believe they will fail.”

“When resources decrease, the margin of error will increase,” said Caroline Raynis, a union steward with Council 4 and one of the New Britain job center workers who was laid off.