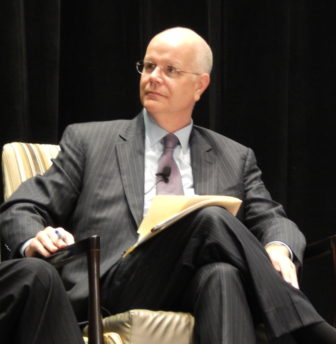 Reining in health care costs for state employees sometimes feels like shoveling water from a flooded basement while the water is still pouring in, state Comptroller Kevin Lembo said.

The state employee health plan has tailored its design to encourage people to manage chronic conditions, get preventive care and avoid emergency room visits. But those savings have been eaten into by the rising expense of specialty drugs for conditions including Hepatitis C, rheumatoid arthritis, multiple sclerosis and cancer, Lembo said. Specialty drugs accounted for just 1.2 percent of prescriptions in the plan in the 2015 fiscal year, he said, but cost $84.4 million, up 47.5 percent, or $27.3 million, from the previous year.

It’s a challenge that’s not unique to the state employee health plans, health care experts noted Tuesday during a presentation to the Connecticut Health Council, a group that aims to promote the state’s health sector.

Specialty drugs, which often require special handling or delivery, have drawn national attention for bringing both dramatic advances in treatment and eye-popping prices. (The title of the health council’s event summed up the issue this way: “Specialty pharmaceuticals: Health miracles and economic nightmares.”)

Those drugs include Hepatitis C medications Sovaldi and Harvoni, which have the potential to cure the disease or prevent patients from needing liver transplants. They can also cost close to $90,000 for a course of treatment. In 2014, for example, Connecticut’s Medicaid program spent $66.1 million on Sovaldi prescriptions for 744 clients.

On a monthly per-member basis, the state health plan’s cost for specialty drugs rose significantly in the 2015 fiscal year, according to Lembo’s figures. For Hepatitis C drugs, the cost was up 274 percent, while the cost of rheumatoid arthritis drugs rose 42.9 percent, multiple sclerosis drugs increased 24 percent and cancer drugs were up 51 percent.

Connecticut insurance companies have cited the cost of prescription medications – including Hepatitis C drugs and a new class of cholesterol medications coming onto the market – as key factors in the need to raise premiums.

And drug costs are a chief health care concern among the public, according to the Kaiser Family Foundation’s monthly health tracking poll. When asked what issues should be top priorities for the president and Congress, 76 percent of those polled in August cited making sure that high-cost drugs for chronic conditions are affordable to those who need them, the highest rate of any issue. And 72 percent said the cost of prescription drugs was unreasonable. 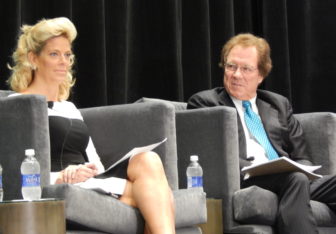 “Americans don’t consume more stuff than anybody else in the world,” he said. “We just pay more for it.”

Can private market tools address drug prices, he asked, or is it something that requires government intervention?

Mickey Herbert, the former ConnectiCare CEO who now consults in the industry, said he doesn’t favor government intervention. But he offered a parallel from the history of managed care and suggested that if health plans, drug makers and health care providers don’t work together to address “out-of-control” prices, the government would step in.

In the 1980s and 1990s, many health plans became popular as strong investments. Mergers became common, driven by Wall Street’s insistence on double-digit growth. But the pendulum swung too far, he said, toward unbridled capitalism.

“Public opinion swung against health plans, frankly,” he said. “We were accused of performing drive-through mastectomies, being the Burger King of health care delivery.”

As a result, he said, the industry decided to police the worst abuses.

“I would argue that we need this more than ever now, from providers and suppliers,” Herbert said.

Lembo said government can and should be one of many pressures pushing the market to do what it should. When a market moves in a direction that’s counter to the values of the society, he said, someone has to step in.

But he added that the exact approach isn’t always clear.

“We’re struggling like crazy trying to figure out what our most effective role is and not pulling any one throttle too hard,” he said.

An official with the pharmaceutical industry’s trade group argued against government intervention and said discussions of drug prices should include context.

“It’s important to look at health care spending as a whole,” said Sharon Brigner, deputy vice president in state government affairs for the Pharmaceutical Research and Manufacturers of America, or PhRMA. She noted that long-term care and hospitalizations are key cost drivers in health care spending.

Brigner also said the amount paid for drugs can be lower than the list prices, since insurers can negotiate discounts and manufacturers provide rebates.

And she spoke of the challenges of bringing drugs to market: It can take as long as a decade and billions of dollars, and the vast majority fail she said.

A better source of savings, she said, would be to focus on ensuring that patients take drugs as prescribed, which she said could save $213 billion a year (savings include reduced absenteeism).

Another challenge, Slocum noted, is that while some specialty drugs are likely to pay off by reducing health care costs years down the road, the company that covers them might not see the savings since by then, the patient could be covered by another company or Medicare. He said he often gets asked, “Why should I water somebody else’s garden?”