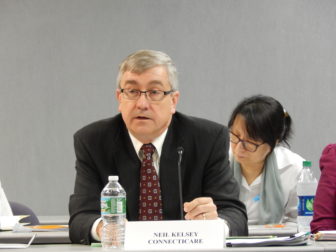 High-cost specialty drugs, including a new class of cholesterol medications expected to come to market later this year, are key drivers of the need to raise health insurance premiums by nearly 10 percent, ConnectiCare’s chief actuary told state regulators during a public hearing Monday.

The Connecticut Insurance Department is considering proposals by seven insurance companies to raise premiums for people who buy their own coverage through the individual market, and held hearings Monday on proposals from three insurers – Anthem, the state’s largest carrier; ConnectiCare, which has the most individual-market customers; and Golden Rule Insurance Company, which proposed a 18.5 percent rate hike.

The proposed rate hikes would, if approved, take effect Jan. 1, 2016. The insurance department is expected to issue decisions by the end of August.

Dozens of customers submitted written comments in recent weeks urging the insurance department to reject the rate hikes. Many described the financial hardships a price increase would cause.

Four people spoke against ConnnectiCare’s proposal at the hearing, suggesting it should be lowered. The proposal – which applies only to plans ConnectiCare sells outside the state’s health insurance exchange, Access Health CT – calls for an average increase of 9.8 percent for plans that cover 34,000 people. The company is seeking a far lower rate hike — 0.7 percent, on average — for its exchange plans.

Angela deMello, a co-chair of the healthcare team for Congregations Organized for a New Connecticut, said the company’s projection that claims costs would rise by more than 8 percent in 2016 didn’t seem to be supported with adequate data.

She also noted that the company’s proposal cited two favorable trends: the expectation that it would no longer need additional money to cover the cost of treating the pent-up medical needs of people who had been uninsured before the federal health law began requiring insurers to cover anyone regardless of medical history; and the expectation that the company would attract younger customers. 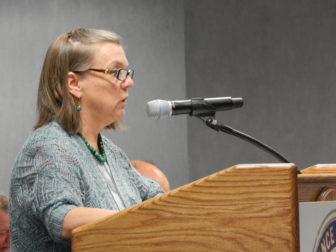 Lynne Ide of the Universal Health Care Foundation of Connecticut testifies on the ConnectiCare proposal.

Lynne Ide, director of program and policy at the Universal Health Care Foundation of Connecticut, raised concerns with both the rate proposal and the hearing process, saying the hearing — held on a summer workday in downtown Hartford — was not accessible to those affected by the proposed rate hikes. Only one person who identified herself as a customer testified during the three hearings – Cheryl Silber of West Hartford said the ConnectiCare rate proposal would raise her husband’s monthly premium to $814.

ConnectiCare officials said they were working hard to control costs – including by developing new arrangements with physicians aimed at improving quality and controlling costs – but needed to ensure that premiums were adequate to cover the cost of members’ care.

Michelle Zettergren, ConnectiCare’s senior vice president of sales and marketing, noted that because of the federal health law, more people can buy insurance, many at subsidized rates, and preventive services are available at no out-of-pocket cost.

“All of these good changes do come with a cost,” she said.

Kelsey, the chief actuary, described some of the claims experience of current members. In 2015, for example, he said, the company has seen an increase in use of neonatal care units for newborns.

Similarly, while the use of medications has remained level, Kelsey said, the cost has increased because of expensive specialty drugs, primarily those that can treat Hepatitis C and cost more than $100,000.

“That’s a good thing because it cures people with Hepatitis C, but it does have a cost,” Kelsey said.

In the coming year, Kelsey said the company anticipates additional increases in specialty drug costs from the introduction of injectable cholesterol medications that are anticipated to cost between $7,000 and $12,000 per year. The first was recently approved by the U.S. Food and Drug Administration and is expected to be on the market this week at an annual cost of $14,000, Kelsey said.

Anthem: Higher medical cost trend than in past 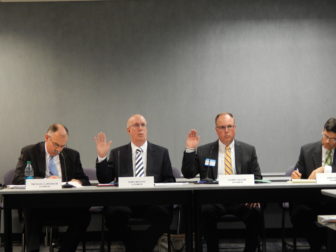 Anthem officials John Bryson, left, and James Augur are sworn in during the rate hearing.

Anthem officials also cited rising drug costs and reduced federal reinsurance payments as reasons for the company’s proposed increase, which averages 4.7 percent for plans sold on the exchange and outside it. Anthem covers 55,000 people in the state’s individual market.

Anthem also attributed a small portion of the increase – 0.24 percent – to costs associated with the “grace period” insurers must give to customers who receive federal subsidies to discount their premiums. Under the federal health law, insurance companies must give a three-month grace period to customers who don’t pay their premium – as long as the customer previously paid for at least one month of coverage – and pay medical claims the customer incurs during the first month of the grace period. Bryson said 9.28 percent of Anthem’s overall individual-market customers did not pay their last month’s premium in 2014. 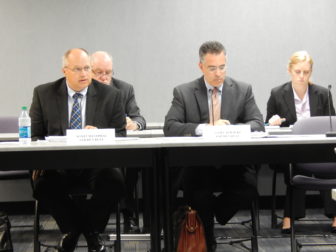 Golden Rule’s proposal to raise rates by an average of 18.5 percent drew sharp criticism from those who testified. Representatives for Golden Rule said the company faced challenges in projecting what it would need to charge in 2016.

Golden Rule had limited experience with health care claims since the major market-rule changes that took place under the federal health law in 2014. All Connecticut plans Golden Rule offered in 2014 were renewed by members in late 2013, allowing them to continue operating under the prior rules, which included allowing the company to sell plans only to people it deemed medically qualified.

While other companies developed their 2016 rate proposals based on 2014 claims, allowing them to have a sense of what claims costs would be like under the new rules imposed by Obamacare, Golden Rule’s 2014 claims were incurred under the old rules. Instead, the company relied on 2013 claims experience, with modifications.

The rate hike was based on three factors, Senior Actuary Scott Westphal said: increased costs of health care claims, a reduction in federal reinsurance payments, and changes in benefit designs.

And, Ide said, regulators should be particularly vigilant about the rates of plans sold outside the exchange, since people who buy their insurance off the exchange are not eligible for federal subsidies to discount their premiums.

Proposed 2016 rate hikes
These are the premium increases insurance companies are seeking for plans sold to individuals in 2016. Some are sold through Access Health CT, the state’s health insurance exchange, while others are sold outside the exchange.
Connecticut Insurance Department
Related Stories