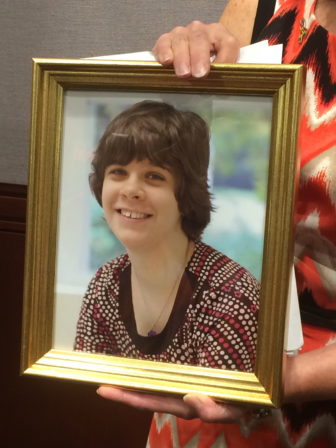 Her name is Jessie. She is autistic, intellectually disabled and about to turn 21. Her mother is a pediatrician who told reporters Wednesday that Gov. Dannel P. Malloy is “doing his best to take her future away from her.”

With those words, Dr. Michelle Rivelli made Jessie the face of opposition to $103 million in emergency budget cuts ordered by Malloy, a Democrat facing second-guessing from the coalition that elected him to a second term last year.

“We need to put a face on this, because this is about people. So, this is Jessie, it’s my daughter,” said Rivelli, setting out a framed portrait of a young woman with a gap-toothed smile and a mop of brown hair. “And this is why I’m here. I’m here for her.”

The essence of lobbying and campaigning is telling a story. With an understated fury, Rivelli and representatives of non-profit community providers who rely on the state for funding framed that story in unusually personal terms.

They cast Malloy, a politician who overcame significant learning disabilities, as circumventing legislators and undermining those most in need.

At a press conference at the Legislative Office Building, they used words like “inhumane“ and “atrocity” and “brutal” as they accused Malloy of using his limited executive authority to make cuts that legislators had explicitly rejected in approving the budget last spring.

Their focus was $16 million in cuts to social services.

In his budget proposal in February, Malloy recommended cutting $6.2 million in services for day programs and employment support for people like Jessie, who are intellectually disabled and served by school systems until age 21.

In the budget adopted by lawmakers, all but $1.1 million was restored. But in the cuts Malloy made this month under his authority to make rescissions of up to five percent of line items other than local aid, the governor trimmed another $3 million, according to the community providers. 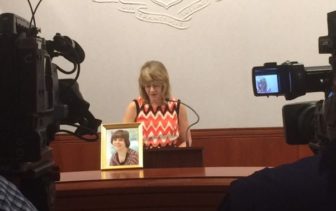 “Our hearts of course go out to the affected families,” said Devon Puglia, the governor’s spokesman. “However, while we understand there is continued demand for service, it’s important to note that we spend about $1.1 billion per year. We have to make difficult decisions and do the fiscally responsible thing while planning for our long-term economic future.”

There is nothing new in social-service providers bemoaning budget cuts, but the tone Wednesday was striking. Speakers suggested the cuts not only were bad public policy, but morally suspect.

“The esteemed actor Morgan Freeman recently said that ‘attacking people with disabilities is the lowest display of power I can think of,’ ” said Patrick Johnson, the interim chief executive officer of the Connecticut Association of Nonprofits.

Rivelli, who lives in West Haven and practices medicine in Shelton, said her daughter, who turns 21 on Friday, will finish her last school year in June. It is unclear if day services will be available for Jessie, whom Rivelli says has a moderate intellectual disability and a limited ability to speak.

Rivelli said she curtailed her medical practice after the birth of her twins, Jessie and another daughter now in college. Like other parents of intellectually disabled children approaching adulthood, Rivelli and her husband are anxious to determine what services will be available.

Socialization and other skills developed through special education will be lost if no services are available after reaching the age of 21, she said.

Rivelli and the other speakers expressed frustration that they just won a partial restoration of Malloy’s proposed social-service cuts during the budget debate, only to see him make reductions the legislature cannot easily reverse.

“Gov. Malloy and his administration have made these rescission circumventing the legislature by taking care that they do not exceed the cap that would call for approval,” she said. “As an elected official, although it is within his legal right to make these changes, he shows callous disregard for the defenseless members of the intellectually disabled community. He also insults the legislators who represent them and the democratic process itself.”

Rivelli said she lost respect for the governor, whose election she supported.

“I truly can’t understand what the thought process is,” she said.

Rep. Cathy Abercrombie, D-Meriden, the co-chair of the Human Services Committee, broke with her leadership and called for a special session to craft alternatives, either in other cuts or new revenue.

“I’m probably going to be in the hot seat, going against my leadership, but you know what, I wasn’t elected to just sit here and say, ‘This is OK.’ Because, personally, it’s not OK,” Abercrombie said.

Abercrombie questioned one of Malloy’s fiscal priorities: Passage of a constitutional amendment protecting revenue set aside for a long-term transportation infrastructure.

“Are you going to put transportation ahead of families? I’m not,” she said. “And I don’t feel comfortable.”

With fiscal analysts projecting even greater budget problems in the next budget biennium, legislative leaders are reluctant to surrender discretion over the transportation funding. But they also have no apparent appetite for a showdown with Malloy.

House Speaker J. Brendan Sharkey, D-Hamden, criticized Malloy’s cuts last week, noting the governor went against the clear wishes of the legislature. He rejected a call for a special session made then by GOP legislators.

“Given the governor’s authority, a special session makes no sense,” he said. He added that “as we monitor the budget in the coming months, the full legislature will have the opportunity to reverse these cuts in the next regular session.”

His spokesman, Gabe Rosenberg, said Abercrombie was expressing frustration felt by many legislators, but the speaker’s view on a special session was unchanged from last week.