Connecticut paying today for pension sins of the past 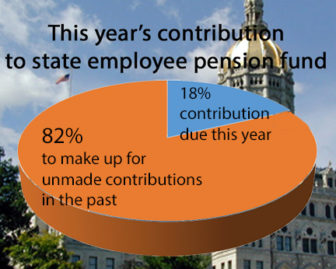 As legislators and others look closely at the cost of state employee salaries and benefits, one crucial factor often gets little or no attention:

The overwhelming bulk of costs Connecticut faces today to support pension programs for state employees and public school teachers is from cleaning up problems caused years – and in many cases decades – ago.

According to Comptroller Kevin P. Lembo’s office, 82 percent of the $1.51 billion the state will contribute this fiscal year to state employees’ pensions will help cover past contributions Connecticut failed to make, as well as the corresponding investment earnings it never received.

Similarly 70 percent of the $976 million it will deposit into the teachers’ pension fund is to cover unpaid contributions and unachieved earnings from prior years.

That means more than $1.9 billion of the nearly $2.5 billion in contributions Connecticut will make this fiscal year are to whittle down the fiscal sins of the past, and don’t reflect the cost of current workers’ benefits.

“We don’t have to dwell on all of our problems, but we have to reach consensus on what the real problems are,” Lembo told The Mirror during an interview last week.

The cost of public-sector workers’ salaries and benefits is a major component of the state budget, and arguably its fastest growing part. But the bulk of the money owed now is not tied to existing employees.

Still, advocates for fiscal responsibility argue that as far as Connecticut’s taxpayer is concerned, the bill is very real, regardless of how the costs break down.

“Overall, state employees get paid an unfair premium over non-government employees,” said Carol Platt Liebau, president of the Yankee Institute for Public Policy. “However, this premium is not distributed evenly.”

The “premium” Liebau is referring to involves the state’s guarantee that a pension will be provided, regardless of whether the state has saved adequately, or what level of returns its pension investments have made.

Liebau added that the institute recommends switching all employees from a pension to a 401(k)-style retirement plan.

The East Hartford-based institute released a study this week that concluded the value of salary and benefits for the average state employee ranges between $125,531 and $146,611 – depending on how future pension benefits are valued. A private-sector employee with similar education and experience receives wages and benefits worth about $96,177 per year, the institute wrote.

This study takes into account the huge annual contributions Connecticut must make to mitigate decades of not saving for its pension programs.

But the study fails to emphasize, according to a spokesman for one of the state’s largest employee unions, that these contributions don’t go toward the benefits of current state employees and public school teachers.

“The danger is this is misleading the public and policymakers about the truth,” said Larry Dorman spokesman for Council 4 of the American Federation of State, County and Municipal Employees. “That can have horrible consequences.”

Among those consequences, Dorman said, is that officials and the general public may forget that since the initial state employee pension program was established, three successive tiers – each with benefits lower than the previous one – have been put in place.

And though some legislators from both parties have suggested talks with labor to cut costs, Dorman said, state employees granted wage and benefit concessions in 2009 and again in 2011.

Dorman charged the institute with “grinding an ideological axe” against public-sector employees and with advocating changes that would result in “putting more money in the hands of rich people and corporations.”