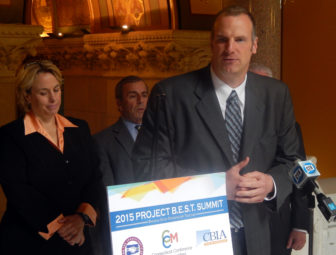 Lori Pelleiter of the AFL-CIO, and Joe DeLong of the Connecticut Conference of Municipalities speaking Tuesday at the State Capitol.

These aren’t groups that usually team up at the state Capitol.

Nonetheless, leading advocates for Connecticut’s businesses, workers and municipal governments will gather next month in Westbrook to tackle the challenges facing the state economy and state government’s finances.

Representatives of the Connecticut Conference of Municipalities, the state AFL-CIO, and the Connecticut Business and Industry Association, said the Nov. 12-13 summit is unprecedented.

And while they stopped short of predicting specific outcomes, leaders from each group said they’re convinced the gathering will build relationships that would find common solutions down the road.

“We want to continue to flourish as a state,” CCM Executive Director Joe DeLong said. “We’re not going to agree on everything, but we all have a lot of common goals.”

“There’s plenty to disagree on, but let’s focus … for two days, on what we can agree upon,” said Lori Pelletier, the top leader at the state AFL-CIO.

The CBIA’s president and CEO, Joseph F. Brennan, said that while business and labor

butt heads on many occasions, they also have found common ground, on issues like transportation, energy and health care.

“I can’t say this is going to be a full success, but we have a great opportunity,” he added.

All three leaders declined to speculate on what solutions might come out of the two-day event, saying that simply holding the conversation – and strengthening communication between all sides – is a worthy goal.

“If we’re not cautious about it, sometimes we’re defined by the things that divide us,” DeLong said.

One thing all three groups have in common, Brennan noted, are the fiscal woes threatening state government. “That certainly was a catalyst,” he said.

In recent months, Gov. Dannel P. Malloy and the legislature enacted a two-year budget that increased taxes $1.3 billion over that period while canceling close to $500 million in previously approved tax cuts.

The governor also laid off 95 workers at the Department of Labor, though most of those employees found jobs in other state agencies. And new calls for state employee concessions have arisen from legislative leaders.

Equally important, projections from the legislature’s nonpartisan Office of Fiscal Analysis, as well as new revenue problems identified by OFA and by the governor’s budget office, leave a roughly $1 billion hole in the first new state budget after the 2016 state elections.