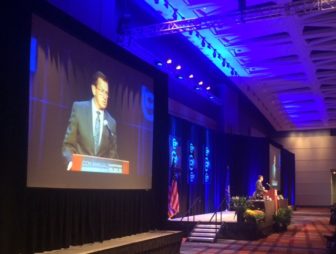 Gov. Dannel P. Malloy’s challenge to legislative leaders to participate in bipartisan budget talks is less a cry for fiscal help than an effort to alter a political narrative that’s failed him in recent months, driving his approval rating to a new low.

Malloy, 60, a Democrat in the 10th month of his second term, is showing signs of returning to the restless campaign mode of his first term to frame what he sees as the state’s challenge to close a mid-year budget gap and position itself for economic growth.

But the political terrain has grown steeper and rockier since 2011, when Malloy took office as a new governor with comfortable legislative majorities to confront a $3.67 billion deficit not of his making. His challenge today as an incumbent is to convince the public he still represents a solution for what ails Connecticut.

His immediate task is to find a political consensus for closing a new shortfall of $118.5 million, one his administration disclosed Monday, just five weeks after ordering $102.8 million in emergency budget cuts. But he is insistent on broadening the conversation from budgetary line items to a vision for restoring the state to fiscal and economic stability.

“There is no excuse in not governing for the future,” Malloy said Tuesday in a speech to municipal leaders. “There is a reality about Connecticut, that the circumstances we’re in were not created overnight or the last four years, but more likely over the last 40 years. We have failed to make the tough choices and make the investments necessary for our economy in the long run to flourish.”

That is a harder message for any governor to credibly deliver in his fifth year than in his first, even if it comes with some justification.

The failure of Connecticut to adequately set money aside for future retirements, for example, will be a financial burden for the rest of Malloy’s term and for the governors who follow over the next two decades.

About 6 percent of Connecticut’s annual $20 billion budget is now consumed by pension payments for retired state employees. The comptroller’s office recently reported that 82 percent of the $1.5 billion annual required contribution to the state employees retirement system is for employees already retired.

In his speech Tuesday to the annual meeting of the Connecticut Conference of Municipalities, Malloy linked the state’s slow rate of economic growth to its aging and overburdened transportation infrastructure. It is a pre-emptive defense of the half percent on the sales tax now slated to pay for the early years of his long-term transportation initiative. 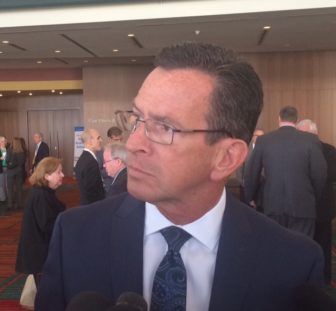 “What’s the first thing a whole bunch of people in Connecticut want to cut back on again? It’s transportation,” Malloy said.

Malloy wants the portion of the sales tax earmarked for transportation to be protected against diversion by a “lockbox” defined in the state constitution. Otherwise, he said, legislators will grab the money, leaving the infrastructure to rot.

“You can be assured they would take the money in the future and spend it elsewhere,” Malloy said. “Why can you be sure? Because that’s what they did in the past.”

Malloy seems likely to maintain this line of criticism to protect the transportation initiative, even as he ostensibly asks legislators for their help. Next week, he is expected to address the annual meeting of the state’s largest business trade group, the Connecticut Business and Industry Association.

Joseph Brennan, the president of the association, said he welcomed the governor’s intention to engage legislative leaders in a discussion about business climate, regardless of the political backdrop.

“I just look at any opportunity to advance the ball down the field as a good thing,” Brennan said.

Malloy’s pursuit of a more aggressive approach to legislators and a more energetic communication strategy comes after steady criticism of the $102.8 million in midyear cuts he announced five weeks ago.

“I gotta say I was a little surprised at the reaction of some of our political leaders, not that they would be critical of the cuts…but that they refused to put forward any ideas of their own on the alternatives,” Malloy said.

Malloy had better results four years ago after strenuously defending his solution to an inherited deficit: labor concessions, spending cuts and a whopping annual tax increase eventually calculated at $1.8 billion. But he was a new governor then willing to meet with angry voters in an extraordinary series of 17 town-hall meetings.

He made no similar effort this year after signing his second major tax increase in five years. The new biennial budget raises taxes, on average, by about $650 million in each year of the biennium. His silence helped the executives of General Electric, Aetna and others to write their own fiscal narrative: Connecticut is too expensive a place to do business.

In a Quinnipiac University poll last week, there were ample signs of how badly Malloy had lost control of how Connecticut sees his approach to the budget and the economy.

Seventy-two percent of all voters, and 58 percent of fellow Democrats, disapproved of Malloy’s handling of the budget. Half said they were “very concerned” at the prospect of General Electric moving its headquarters out of state in reaction to the state’s tax policies and unsettled fiscal climate.

Unemployment has fallen throughout Malloy’s tenure. It now stands at 5.2 percent, and the private sector has recovered most of the jobs lost in the 2008 recession.

Brennan said residents and businesses are rattled by the cycle of deficit, tax increase and deficit. Echoing Malloy, Brennan said the state needs to assess how much government Connecticut can afford.

“We have to address the fiscal issues to give greater confidence to people,” Brennan said.

Malloy said that is his goal, but also seemed intent Tuesday on keeping expectations in check. He told the municipal leaders, “There is a reality about where we are in this world, that we are in a slower growth environment than any of us have experienced on a sustained basis in any of our lives.”