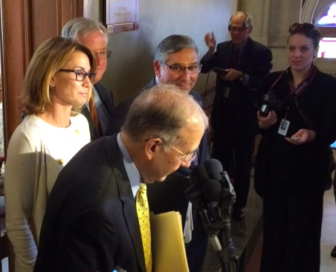 Gov. Dannel P. Malloy and legislative leaders hailed the first round of budget talks Monday as a cordial first step toward a bipartisan solution, even if they cannot quite agree on the scope of the shortfall facing Connecticut.

With the legislature’s nonpartisan analysts projecting the current deficit as just over twice the shortfall reported by the administration, legislators conceded the first step is to find agreement on the depth of the problem.

“We need to get clarification on that as a starting point for our discussions next week,” Senate President Pro Tem Martin M. Looney, D-New Haven, said after top lawmakers and the governor wrapped a 70-minute discussion in Malloy’s office in the Capitol.

“We have different ideas on what parts of the budget should be included in the deficit,” added House Minority Leader Themis Klarides, R-Derby. “That’s what we’re going to try to clarify.”

Legislative leaders have said they don’t expect to wrap up the new deficit-mitigation effort before mid-November at the earliest. That’s when budget analysts are due to update their projections for state spending and revenue trends.

The governor, who called last week for the bipartisan talks, reported a $118 million hole in this fiscal year’s general fund, a problem he attributed to weaker-than-anticipated state income tax receipts.

And while that gap represents about two-thirds of 1 percent, it is the second deficit the governor has reported since mid-September. The earlier shortfall, about $103 million, also was attributed to the income tax. Malloy plugged that gap with emergency cuts aimed largely at hospitals and social services.

And if legislators want to restore the $103 million in cuts to hospitals and social services with reductions in other programs, than the true budget-balancing challenge facing officials now is roughly $430 million, according to Fasano.

Despite the tougher fiscal challenge, legislators said the mood Monday was upbeat and optimistic.

“I think we all want what’s best for the state of Connecticut,” said House Majority Leader Joe Aresimowicz, D-Berlin.

“And we all have an obligation to get there,” Klarides quickly added.

Fasano said he doesn’t expect there will be a prolonged debate over the scope of the deficit. “We feel confident we can go forward and look at our real differences,” he said.

Malloy spoke briefly to reporters after the legislators departed.

“It was great to have the leadership in the office and have a discussion,” he said.

Malloy, who had expressed frustration last week that legislators, while objecting to his emergency cuts, had not offered many specific alternatives, also was optimistic.

“I’ve invited people to share their ideas,” he added. “I think we’re going to get to the point where those ideas get shared. And I think are people are coming at it in a good-faith manner.”