No resolution over SEEC’s authority in Malloy case 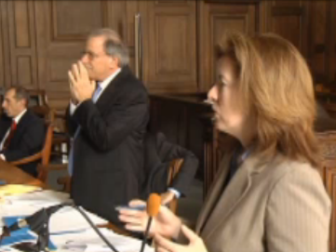 Judge Antonio C. Robaino repeatedly declined to direct Michael Brandi, the executive director of the State Elections Enforcement Commission, to respond with a clear “yes” or “no” to questions about his agency’s jurisdiction.

Brandi was the only witness during an all-day evidentiary hearing in Hartford on the state’s request for the court to compel the Democratic State Central Committee to honor an investigative subpoena for finance records and emails.

Robaino continued the hearing in the case until Nov. 17.

The immediate issue before the judge is the validity of the subpoena, but David S. Golub, a lawyer for the Democratic Party, is pressing the court to quash the subpoena with a ruling that also would stop the investigation.

The wrinkle is that contractors are permitted to give to federal campaigns and the parties’ federal campaign accounts — and federal law requires that get-out-the-vote efforts in federal election years be financed under the federal rules.

Since every federal election year coincides with elections for state office, Golub told the judge, not only is it permissible to use the federal account for a get-out-the-vote mailing in support of Malloy, it is required.

Golub presented regulations indicating that any get-out-the-vote effort in a federal election year, even if it does not feature a congressional candidate, must come out of the federal account if it provides basic information — such as polling hours and how to get a ride to the polls.

But the lawyer had a long, frustrating day trying to get Brandi to clearly opine about the limits to his agency’s jurisdiction or what constitutes a “federal election activity,” permissibly funded by the party’s federal account.

Assistant Attorney General Maura Murphy Osborne told the judge that Golub may ultimately be right on the jurisdictional issue, but it is premature to halt the investigation.

“At this point, the State Elections Enforcement Commission is simply seeking to conduct a meaningful investigation,” she said.