Bronin wins in Hartford, warns ‘no easy answers’ lie ahead 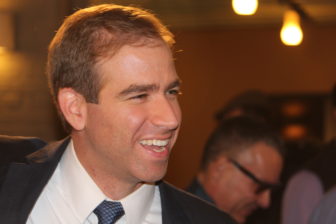 Luke Bronin at his victory celebration

Hartford voters Tuesday, in an election that was largely a formality, selected Luke A. Bronin as their next mayor.

Bronin, a lawyer who grew up downstate, raised considerable campaign cash and unseated incumbent Mayor Pedro Segarra in a Democratic primary, becoming the party’s candidate in a city whose residents overwhelmingly vote blue.

Bronin used his victory speech at Real Art Ways in Hartford to thank his supporters and lay out the problems he plans to tackle during his four-year term.

“It’s time to get Hartford working again,” said Bronin. “When a city faces the challenges that we face, there are no easy answers…The challenges are big but so is Hartford’s promise.”

The task of putting the state’s capital city on the path to economic prosperity is huge, given what Bronin described during his victory speech as a “budget crisis” facing the city.

Hartford — a city of 125,000 residents — has by far the state’s highest mill rate and a taxable grand list nearly identical to that of towns, such as Farmington and Guilford, that are a fraction of its size.

The city also has one of the highest unemployment rates in the state. 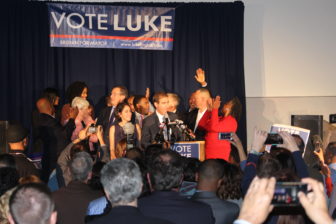 Luke Bronin celebrates his victory with his supporters

Bronin, 36, who moved to the city nine years ago, also campaigned on improving neighborhood schools, boosting state and federal funding to the city, and increasing community policing as homicide rates spiked over the summer.

The neighborhood schools in Hartford are among the worst performing and segregated in the state, and Bronin has said a child shouldn’t have to win the school choice lottery to get a desk in a good school. The Bronin family’s decision to send their children to a private school in West Hartford became an issue in the campaign. They made it after Bronin’s daughter failed to win a seat at the Annie Fisher Montessori Magnet while his son, who is younger, did.

During his victory speech he characterized the neighborhood schools as “under-enrolled and overburdened.”

In a city where 84 percent of the residents are minorities, Bronin becomes the city’s first white mayor in 15 years. Bronin moved to Hartford in 2006, but he was absent from the city while serving in Afghanistan with the U.S. Navy and then working during President Obama’s first term as a lawyer assigned to tracking terrorist financing. Bronin has never held elected office, and this was his first election bid. 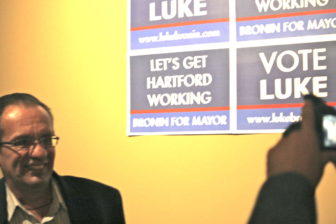 Gov. Dannel P. Malloy, who held off endorsing a candidate in the Democratic primary, joined the victory party Tuesady night. Bronin was the governor’s general counsel for two years before entering the race in January.

“We knew Luke was going to win after he won the primary. I think he is going to be a great mayor. I am looking forward to working with him,” the Democratic governor said shortly after the polls closed Tuesday.

Addressing a roomful of supporters, Malloy said he has given Bronin some advice.

“I’ve given him the advice that I’ve always tried to take, but it’s a lot easier for me to do than it will be for him. My rule is to always hire people who are brighter than you. That’s how I ended up with Luke Bronin working for me,” Malloy told a cheering crowd. “Hartford, you could not have a better mayor.”