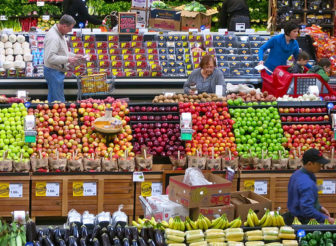 Washington – While the most recent big incident of food poisoning involves Chipotle Mexican Grill in Oregon and Washington state, Connecticut has not been spared from multi-state cases of food contamination, and federal officials say the threat of big food outbreaks is on the rise.

In a report released this week, the Centers for Disease Control said major outbreaks of food-borne illnesses have more than tripled in the past 20 years.

The CDC also said that in the most recent five-year period, from 2010 to 2014, multi-state outbreaks were bigger and deadlier than in the past.

The Obama administration is finishing its implementation of a 2011 food safety bill that would, for the first time, give the Food and Drug Administration authority to institute food recalls and require farms to keep track of where their products are sold. But food safety advocates, and the Obama administration, say this isn’t enough to protect the nation’s food supply from the increasing frequency and severity of food-borne illnesses.

CDC Director Thomas Frieden said outbreaks of food poisoning have become more serious because they involve deadlier germs – some of which have mutated to involve bacteria resistant to antibiotics.

“They can be big and they can be lethal,” Frieden said in a briefing earlier this week.

For example, this summer 15 people in seven states, including one person in Connecticut, were infected with an antibiotic-resistant strain of salmonella. The CDC said “traceback” information indicated that raw, frozen, stuffed and breaded chicken entrees produced by Barber Foods were the likely source of this outbreak. No one died, but nearly 2 million pounds of frozen chicken were recalled.

The CDC said that since 1999, Connecticut residents have been victims of 67 multi-state cases of food contamination and 211 other cases of food poisoning that were confined to the state. That’s fewer cases than in New York but more than in New Jersey.

But those figures are likely to underreport the problem.

The CDC tracks multi-state cases of food contamination and some single-state cases that are particularly severe or involve a particularly dangerous pathogen like listeria, a bacteria that can cause a serious infection or even be deadly, especially to pregnant women, the aged and those with compromised immune systems.

But many more cases are handled solely by state and local food safety agencies and not reported to the CDC.

Some of the cases the CDC has tracked recently in Connecticut include an outbreak that began in May of this year of cyclosporiasis, an intestinal illness caused by a microscopic parasite that occurs when someone ingests tainted food or water. About 546 people fell ill with the disease, five in Connecticut, but the CDC was unable to determine its source.

Another multi-state case that sickened eight people in Connecticut was a November 2014 case involving bean sprouts traced to Wonton Foods Inc. that were tainted with salmonella. A total of 115 people in 12 states were determined by the CDC to be part of this case.

Elliot Olsen, an attorney with the Pritzker law firm in Minneapolis, which specializes in food poisoning cases, said the change from buying fruits, vegetables and other foods locally to the national and international distribution of food products is driving the increase in big multi-state cases.

“Distribution patterns are getting bigger and bigger, and the longer it takes to figure out where something (tainted) came from, the more people are going to get sick and die,” he said.

Most single-state cases of food poisoning in Connecticut involved restaurants.

The Obama administration is finally implementing the Food Safety Modernization Act, which became law in 2011, but was mired by the number of regulations needed to carry it out and a pushback on user fees from food processors and farms.

The law gives the Food and Drug Administration, for the first time, authority to recall food in cases of contamination or illness. Previously recalls were conducted by food companies and producers voluntarily.

The bill also requires farms to track to whom they sell their products and implement plans to deal with recalls or outbreaks of disease. FDA officials will also be given access to farm records in case of an outbreak.

But many facilities, including farms and restaurants where food is prepared or served directly to the consumer are exempt from the new food law.

DeLauro has also pushed, since 1999, for a single federal agency to be in charge of food safety.

She says that‘s needed to put one agency in charge of everything pertaining to the safety of the nation’s food supply and processing.

“When you get to a big outbreak and you ask ‘who’s in charge?’ you find nobody is in charge,” DeLauro said.

Besides the FDA and CDC, the U.S. Department of Agriculture’s Animal and Plant Health Inspection Service ; USDA Grain Inspection, Packers and Stockyard Administration; and USDA Agricultural Research Service are involved in food safety. So is the National Institute of Food and Agriculture; the National Marine Fisheries Service; the Environmental Protection Agency; U.S. Customs and Border Protection; and about a half dozen other federal agencies.

In February, the Obama administration proposed that these agencies be combined into a single entity: the Food Safety Administration, which would become part of the Department of Health and Human Services.

But DeLauro, who introduced her latest single food agency bill earlier this year, said the Obama administration has done little about the initiative since.

She says the issue of food safety is ignored until there is a major outbreak, like the current case of 40 people in Oregon and Washington who are infected with E. coli and had all eaten recently at several Chipotle restaurants.

“When there’s a big, enormous outbreak, people pay attention for a while, then it all goes away,” she said.

Olsen of the Pritzker law firm said one thing that would be effective in stopping food contamination is for USDA inspectors at meat and poultry plants to routinely test the products, instead of depending largely on visual inspections.

“That’s where that could make a difference,” he said. “Only a tiny fraction gets tested.”

Late last month, after routine testing, the USDA Food Safety and Inspection Service determined that a sample of meat at a Hartford processor, Adolf’s Meat Products, was contaminated with listeria and customers were asked to return or destroy some products, all of which were sold only at the company’s store.

The owner of the facility said the likely cause was a broken drain pipe. Meats at the facility were destroyed, and the facility was cleaned. No one has been reported as being sickened.

The recovery centers alleviate stress on nursing homes by allowing residents infected with COVID-19 to be transferred there.

Fear of flying is a COVID-era conundrum

The holidays are approaching as COVID-19 case rates nationwide are increasing, leading to dire warnings from public health experts.

Starving seniors: How America fails to feed its aging

Millions of seniors across the country quietly go hungry as the safety net designed to catch them frays.